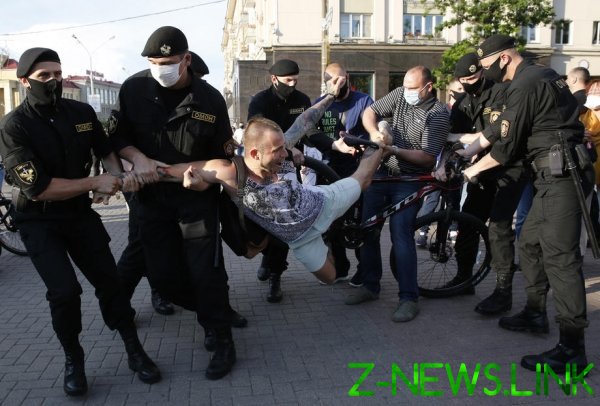 In the capital of Belarus and other cities of the country began to protest against the decision of the Central election Commission about non-admission to the presidential elections candidates for the post of the head of state Victor Babariko and Valery Tsepkalo, according to the portal Tut.by.

Started detention of protesters, the exact number of detainees is unknown. According to the newspaper “Nasha Niva”, Minsk policemen in mufti during a live broadcast detained the correspondent and the operator “ERB.”

Footage from Minsk showed in the broadcast of the TV channel “Belsat”. During the stream the picture is lost, were heard the words of the journalist, “I’m coming, I’m coming myself,” later, the camera managed to capture footage of the car. In the Studio of the TV channel said that the journalist of “Belsat” Ekaterina Andreeva have detained law enforcement bodies.

In Homel were detained in the course of the stream crew edition “Strong news” – Nadia Puginsky, Yuri Glushkov, Marina Drobyshevsky. People from the area near the circus broke up. To the question, why not walk, from the Riot response was received: “you can Walk, but not here.”

Earlier on July 14, the Central election Commission of Belarus has registered the incumbent head of state Alexander Lukashenko as a candidate for President of the country. Besides him were registered four candidates: co-chair of the Association “Tell the truth” Andrey Dmitriev, ex-Deputy Anna Konopacka, wife of the works of Sergei Tikhanovski Svetlana and the leader of the party “Belarusian social-democratic Gromada” Sergey Cerecer.

At the same time, Central election Commission of Belarus has not registered opposition leader Valery Tsepkalo. The Commission decided that it could not collect more than 100 thousand valid signatures in his support. In addition, the Declaration on incomes and property of his wife revealed false information. Earlier, the CEC refused to register for elections and former Chairman of the Board of Belgazprombank Viktor Babariko. The Chairman of the Commission referred to the errors in his Declaration, and his campaign foreign organizations.

Himself Victor Babariko together with his son Edward, who was the head of his election headquarters had been arrested. They were charged with money laundering, evasion of taxes in especially large size and bribery. Also as part of the investigation detained about 20 people, including top managers of the Bank, which Victor Babariko headed for almost 20 years.