Home / policy / In Belarus began the “rampant democracy”, but under control

In Belarus began the “rampant democracy”, but under control 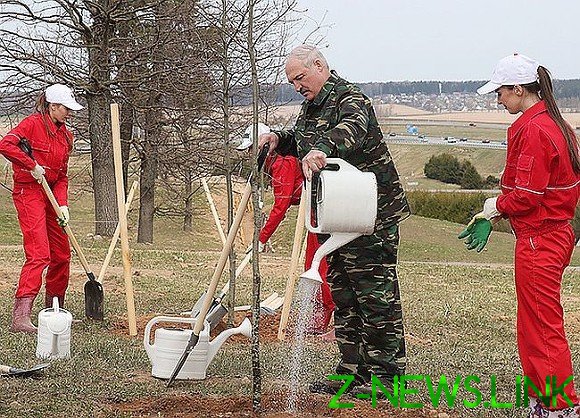 In the Union of the Russian Federation the Republic of parliamentary elections are coming soon. Politicians see them as the first stage of the transit of power from Lukashenko to… who knows.

In Belarus, on 17 November, elections will be held in the House of representatives — the lower house of Parliament. (There is still top, but it is not formed by popular vote.) This election was a good illustration of how the Belarusian system of government: they are appointed by its decision, Alexander Lukashenko, thus, without any explanation, cutting the term of the current Parliament on 10 months. And no one make a sound. And the CEC, the head of which your post is already more than 20 years, listened to the recommendations of Western experts to improve the transparency of the election — and sent them back to their European democracy.

Elections to the Parliament (National Assembly) of Belarus — the first stage of a long election campaign. The second presidential election, which is scheduled for August 30, 2020, on the birthday of Lukashenko. Alexander G. is not just vaguely hinted that his election will be the last in the career, and then followed by the transit authority. According to the majority of Belarusian political scientists — in the spirit of Nazarbayev: it’s no coincidence Lukashenko for several years talking about plans to change the Constitution to transfer some powers from the President to the Parliament and the government.

Indeed in the autumn of 2016 occurred by Belarusian standards sensation: for the first time since 1996, the legislature passed two of the opposition — the head of “Belarusian language Society” Elena Anisim and a member of the United civil party Anna Konopacka. And although the circumstances of the election of both was pointedly controversial (they are in their districts strangely defeated much more powerful competitors from the opposition), it was a breakthrough. The house of representatives cannot be called as before, “the highest paid chorus country”: Anisim and Konopacka confidently voted against, and oppression of the officials with their requests. For example, Anisim tried to force the staff of the Parliament to translate the laws into the Belarusian language, and Konopacka find out the details of “integration” talks between Lukashenko and Putin. However, it did not happen neither one nor the other.

“Fundamental changes have occurred. Since 1996, the role of the Belarusian Parliament was: to claim the status of laws, presidential decrees and government regulations. At this, the initiative of deputies did not provide: the previous Parliament in its entire cadence put forward three bills, none have become law — said “Rosbaltu” Belarusian political expert Anton Platov. — With the current situation is no better, although first we do not see a unanimous vote, but the hearing pointed questions to officials and the President. However, the answers to them as there was no and no.”

Besides, built a hierarchy of power in General can do without Parliament. Orders, decrees and directives Alexander Lukashenko has in fact signing have the status of laws and their adoption by the National Assembly is mere formality. So it is not surprising that none of the deputies of the current composition of the house of representatives did not even dare aloud to resent the fact that they will lose all ten months of its legal mandate (the deadline of the next parliamentary elections — September 10, 2020).

But in the civil society of Belarus for the last five years significant changes have occurred. Opposition political parties and are more ghosts with a few hundred activists, independent media (if they socio-political or economic issues) are closed (in which few people dare to advertise) or you live on Western grants, human rights defenders still multiply reports for Western donors and trying to help the defendants in many courts.

Meanwhile, the Belarusian authorities after the outbreak “toadskin” protests in the beginning of 2017 has developed a new strategy for dealing with street activity of any opposition. Now the unpopular brutal crackdown of the crowd forces the “astronauts” with batons, while the “swoop” of all who came under his hand. The new law “On mass events” overcome “rampant” democracy in the streets. That’s just to submit an application to the local Executive Committee in advance of need, and the authority will determine the place for conducting the action. The opposition usually generously grounds for dog-walking somewhere on the outskirts of the town, Pro-government organizations — Central square.

Further, the applicants shares must estimate its approximate size and pay in advance “service” of police, ambulance and public utilities. Usually go tens of thousands of dollars — amounts for the Belarusian opposition is obviously unsupportable. And to pay in this way need even for a picket. The fact that these services are paid from taxes of citizens, no one cares. Among other “innovations” — infinite administrative arrests of democratic activists with hefty fines and preventive custody “the most violent” on the eve of any of the shares.

The result — peace and quiet, opponents of the regime on the streets not to drive. Democracy. And from the “Maidan” insure regular passages Lukashenka in the TV. “Do you want to make it like in Ukraine?!” — pathetically he exclaims, rolling his eyes. Later in the video — burning tires in Kiev and homes in the Donbass. It is clear that the average Belarusian man in the street does not want this, and “not common” out of the country for the most part already left.

But back to the election. In Belarus they are arranged so that the opposition is virtually excluded from the formation of election commissions and observers only formal — to actually control the vote count they can’t. In fact all agree that the elections in the country perform the function of simulation of democratic procedures and do not have independent meaning.

Good confirmation of this — the story of a 20-year-old Belarusian student Elisabeth, who tried to sue a complaint against Lukashenko. In the complaint, dated August 9, the student tried to appeal the actions of the President, who called for the election of the Parliament so that ten months has reduced four-year term of the house of representatives. The student said that the postponement of elections almost a year earlier infringes on her right (and the right age) to be elected to become a member of the house of representatives only 21 years old.

But on August 13, the Complainant received a response in which the judge found that the complaint against the President is not subject to review. Despite the fact that the Constitution provides the right to appeal any action of the state, infringing on the rights of the citizen. On August 14 the head of the Belarusian Central election Commission Lidia Yermoshina at a press conference commented a court complaint 20-year-old student. According to the official, “it’s banter”. “She knew that to challenge this edict impossible. Well poreklamirovat itself and this idea”, — said Lydia Yermoshina, which international observers accused of falsifying the results of all elections held in Belarus over the past two decades.

Of course, opponents of the authorities are interested to use the parliamentary elections to be generated with their participation in the national agenda. However, since there is no election on party lists, the opposition is split, its resource base is weak, fresh ideas are in short supply, the authorities have a great opportunity to keep the agenda in the parliamentary elections in their hands. At the same time, the opposition parties certainly will attempt to use parliamentary campaign as a springboard for their candidates for the presidency in 2020.

The upcoming parliamentary elections there is one very important point: they will be held in the period of the next exacerbation between Minsk and Moscow — as it in November as adoption of the road map of action for greater integration of the two countries. On this is superimposed the negotiations on the gas price for Belarus after 2019, the current contract with its $129 per thousand cubic meters is about to expire. In this unsafe situation Alexander Lukashenko is very important to show the West that he is ready to begin the transfer of power to democratically elected structures. So it is very likely that in the House of representatives of the new convocation of the opposition would have a little more.