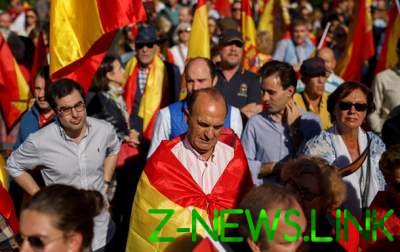 The protesters oppose the independence of Catalonia.

In the Catalan capital of Barcelona, after the vote by the regional Parliament for independence, held a rally in support of the unity of Spain.

Tens of thousands of people in the streets of Barcelona demanding a return to “institutional normality”.

As reported by municipal police Guàrdia Urbana, in a demonstration attended by about 300,000 people.

The organizers of the rally claim that the protests were joined by over one million people.

In particular, the protesters shouted slogans: “Catalonia is Spain”, “Better together” and “We are all Catalonia”.

The leader of the party “Citizens” in the Catalan Parliament INES Garcia said at the protest: “Today, the silent majority of Catalonia is back on the streets”.

See also:  Powerful blast in Iran: footage from the scene of an emergency. Video