Home / WORLD / In Barcelona and Madrid, and held large-scale rallies

In Barcelona and Madrid, and held large-scale rallies 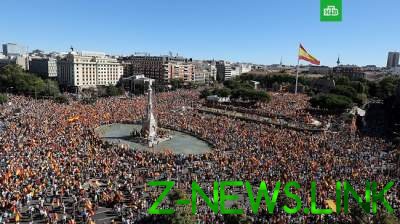 Some require honesty, others – unity.

7 October in Madrid and Barcelona held large-scale rallies in support of the negotiations between the Spanish government and the leadership of Catalonia.

People in Barcelona took to the streets in white clothing and with posters that say “Let’s talk”, “No to violence, Yes to dialogue” and “Spain is better for its leaders.”

At the same time in Madrid, protesters armed with flags of Spain and consider their main slogan “the Country must remain United.”

It is expected that on Tuesday the President of Catalonia, Carles Potsdamand will appear before the Catalan Parliament. He previously stated that Catalonia will declare independence in the coming days unilaterally. So he will fulfill the decision of the referendum held in Catalonia on 1 October.