In Australia ceased production of cars 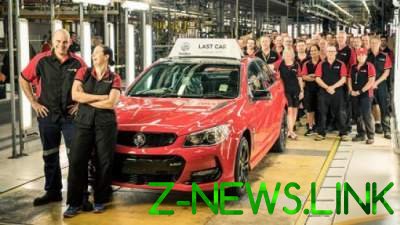 In October, the Holden automaker closed its plant in Adelaide (Australia). This company was the last on the continent: the era of the Australian auto industry is officially over.

Platform of the American company he worked for almost 70 years. Recall that the Holden brand belongs to General Motors. The last car that rolled off the Assembly line Australian plant, became sedan Holden Commodore V8 red.

Earlier in Australia the production of cars was carried out by three companies – Toyota, Ford and Holden. However, the leadership each of them has decided to stop production so Ford closed the plant at the end of last year, Toyota recently, on October 3 this year, and Holden – 20 Oct.

As noted by the managers, the main reasons for completing activities was a significant rise in production, the high exchange rate of the Australian dollar, the fragmented market and increasing competition from foreign companies.

Last decade the Australian car industry existed largely thanks to the support of the state, the amount of which in the period from 1997 to 2015 amounted to about 35 billion. Two years ago the Federal government decided to stop subsidizing the industry after 2017.

Once the country has produced about 475 thousand cars a year, even at the beginning of this decade, automakers were looking for ways to increase exports to countries such as the United States, but production costs were too high.

Thus, from 2018 all new cars sold in Australia are of foreign manufacture.