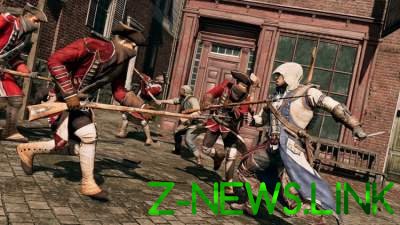 The remaster will appear on PlayStation 4, Xbox One and PC on March 29.

Not long ago, Ubisoft showed a new video, as the visual component of the remaster of Assassin’s Creed III will be improved compared to the original. However, changes to expect in gameplay – they are the developers said in a new blog post.

According to the creators, the interface will be “significantly redesigned” to fit modern standards. One of the changes will be the appearance mode for the color blind, which can see enemies on the mini-map will become easier.

Will redo the in – game economy-it will become clearer, and a list of created items will be replenished with several types of weapons. Lovers pass Assassin’s Creed is secretly waiting for especially a lot of innovation, now can be hide in the bushes to lure enemies by whistling and commit a double murder. Also among the available costumes will appear in the guises of Alexios, Biaka and Aguilar.

The remaster will appear on PlayStation 4, Xbox One and PC March 29, it will be free for owners of the season pass of Assassin’s Creed and Odyssey on the same day will go on sale separately. Version Switch is delayed until may 21 – there is promise different types of interface for portable and stationary regimes, the ability to use the gyroscope when aiming and even click.