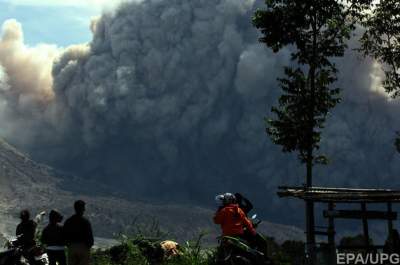 In the region declared the highest level of risk.

On the Indonesian island of Sumatra, the evacuation of the population due to the activation of the volcano Sinabung

Video of a Grand eruption, taken by eyewitnesses were published on YouTube.

They are seen as from a volcano to a height of about five kilometers out of the smoke and ash of a huge square that already has covered several nearby villages.

In this regard, the local authorities declared the highest level of risk.

Note that the Sinabung is just one of more than 120 active volcanoes in Indonesia.

For several centuries it was considered extinct, but again began to erupt in 2010.

In early 2014 Sinabung eruption led to the deaths of at least 16 people.

The fact that Indonesia is located on the border of several tectonic faults, where the mutual displacement of the plates causes high seismic and volcanic activity.

This “ring of fire”, as it is called by geologists, embraces the entire Pacific coast in Asia, South America and Australia.