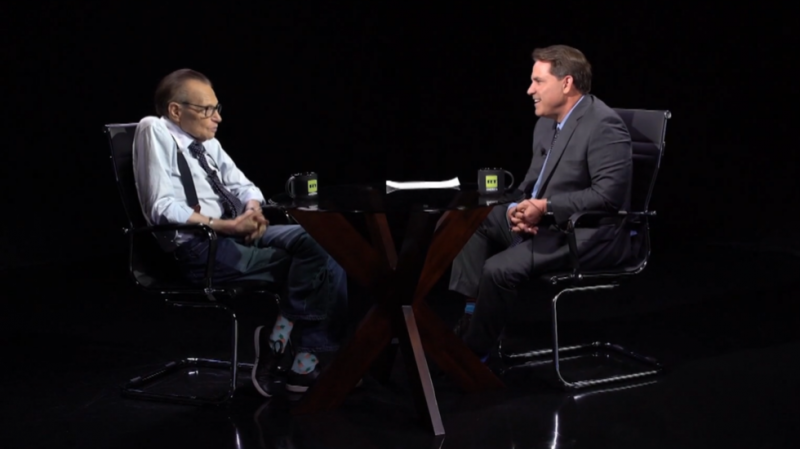 The interview was taped over a year ago, when King sat down with his personal friend Sanchez to share some anecdotes about his life and thoughts about his distinguished career, which made him one of the most recognized people in the media industry. The New York City-born icon said that, despite spending much of his life in Miami, he liked to think of himself as a “Brooklyn kid” because it was an essential part of his soul.

“That’s what I brought to the business: being that kid who went to Dodger games. All my friends would want autographs. I would wanna ask questions,” he explained.

This genuine desire to know what drives people was what made him such a successful interviewer, King said. It was the same whether the other person was the president of the US, or singer Bobby Darin, the first celebrity King ever interviewed, or a random person calling on his show, or terrorist leader Osama Bin Laden.

“I am curious about the person. The event comes later,” King said, describing how he would have talked to the late leader of Al-Qaeda, if given a chance.

While talent and dedication to the job – even to the detriment of King’s many marriages – were key to his career success, so was luck, he stressed.

“[Actor] Paul Newman told me something that is so true: any successful person in any field, who in discussing his or her life doesn’t use the word ‘luck’ is a liar,” he said.

RT was the last place King worked before his passing. He said he considered the channel “underrated” and undeserving of the sinister tone that some people use to describe it. “I have never, ever had a guest that they didn’t run. I had [Russian President Vladimir] Putin criticized three times a week. They have never shut that down,” he said.

If King had any regrets, he said it was that the interviews he did on RT were recorded and missed that vibe of unpredictability he so much enjoyed doing live shows.

King recalled several stories from his past, like the one about him almost losing his job after the first overnight shift as a DJ on the radio. He put a Harry Belafonte album on play and walked out of the studio for a fling with a stranger who called him, but after reaching her apartment discovered that the vinyl record had got stuck. He also recalled being in the crosshairs of the “broadcast bully,” Fox News host and competitor Bill O’Reilly, and how he dealt with it.

In the last years of his life, King did what he loved best: working and wondering what the next day would bring. He joked that he wanted his obituary to read: “Oldest man in the history of the world passed away today, shot by a jealous husband. It took three weeks to wipe the smile off his face.”

You can watch the full interview on RT America and Portable.tv.