Home / culture / “I’m still in a trance”: a new scandal with Pugacheva

“I’m still in a trance”: a new scandal with Pugacheva 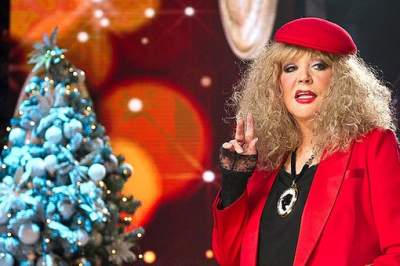 The performance of Alla Pugacheva in the new year television, which this time liked almost all her critics last year, unexpectedly turned into a scandal. On the singer, but rather on the author of the song, which she performed on the night of January on channel, was accused of plagiarism.

“That’s not like the viewers to see and hear “new year party” Alla Borisovna, but no — decided yet diva to appear with the premiere of songs of Oleg Vladi “I flew,” — wrote in his Facebook Vulih the first of January.

“Nothing, the beautiful melody of the solo, Yes, but painfully familiar it seemed to me and my co-composer Igor Saruhanov. In other words, as two drops of water similar to our song “Invented love”, written over fifteen years ago,” said Vulich.

According to the poet, his song was a real hit and has received several diplomas of the contest “Song of the year”.

“So when you listen and watch “Christmas Light”, will pay attention to this a hundred percent plagiarism,” said Vulich.
That would not be unfounded, the poet suggested everyone to view and compare two songs. “Unpleasant smells of scandal, this story, my friends,” he concluded.

“The man took sarochanskie song, came up with her new text, changed a little the tone, and all sold Pugacheva as their own. Note in touch, even to the grandma do not walk,” he said. According to him, to understand this, it is not necessary to be a composer.

However, already the second of January, the scandal has received unexpected continuation. Vulich admitted that Pugachev called him the first of January, to settle the misunderstanding.

Thinks Oleg Vladi — the author of the song “I fly” about sprinkle in his address the accusations at the moment is not known.

In the evening the second of January with comments made by Igor Saruhanov. He turned to his fans via Facebook after failing to cope with the onslaught of questions from the press.

“I didn’t want to comment on what is happening in the media, regarding the similarities of the new song Alla Pugacheva with my song “Invented love” in the poems of Alexander Volya, but not giving me the media for the second day, bombarded me and my co-author with questions and requests comment on this fact. I have no complaints to Alla Pugacheva, but the composer is. I think not valid, the fact of the plagiarism, if it occurs. In this case, the fact that on the face, and this should be handled by experts are designed to detect, to restore the rights of authors and to protect them! One and the same melody in two different songs, to publicly not sound!” — Saruhanov has declared.