Home / WORLD / I’m on a ‘hit list’ Kiev allows to silence dissent & journalism. That’s all you need to know about Ukrainian ‘democracy’ 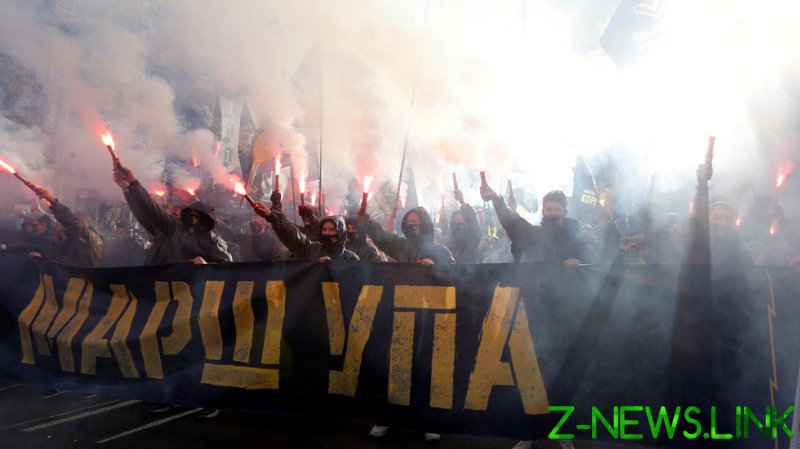 Last week, photojournalist Dean O’Brien participated in a United Nations meeting to give his perspective on the war in Donbass, Ukraine’s breakaway region in the east. Shortly after the discussion, O’Brien came under fire from the Ukrainian embassy in the UK.

However, smears from Ukrainian officials are nothing compared to what the controversial ‘enemies of Ukraine’ database, the Mirotvorets (Peacekeeper) website, could bring.

In May, O’Brien and I discussed this hit list, noting that we were both on it, with photos of us published on the witch-hunt website.

“It’s a website called ‘Peacemaker.’ It’s anything but, really. It seems to be a hit list, a target for journalists or anybody that goes against the grain in Ukraine. If you’re reporting on them, they see you as some kind of threat and put you on this list,” he said.

The platform was created in 2014, shortly after Crimea was reabsorbed by Russia and the Kiev government’s military campaign in eastern Ukraine was launched. As TASS noted in 2019, Mirotvorets “aims to identify and publish personal data of all who allegedly threaten the national security of Ukraine. In recent years, the personal data of journalists, artists or politicians who have visited Crimea, Donbass, or for some other reason have caused a negative assessment of the authors of the site, have been blacklisted by Peacemaker.”

Talking about the horrors that Donbass civilians endure under Ukrainian shelling is, according to this rationale, a threat to Ukraine’s national security. As is going to Crimea, maintaining that Crimeans chose to be a part of Russia (or, as many in Crimea told me, to return to Russia) and criticising the influence neo-Nazis wield in Kiev.

“The most worrying thing is that they seem to be able to get a hold of people’s passports, visas,” O’Brien told me. “The fact that they can get ahold of your passport photo, your visa photocopies, these can only come from official government offices in Ukraine. This is a governmental website, it’s been discussed in parliament, to close it down. They’re not interested in closing it down. This website is kind of like a hit list, really.”

That might seem like an exaggeration, but people listed on Mirotvorets have been targeted and even killed.

A report by the Foundation for the Study of Democracy titled “Ukrainian War Crimes and Human Rights Violations (2017-2020)” gave the example of a Ukrainian journalist assassinated in 2015 after his personal details were published on the website.

“A few days before his death, Oles Buzina’s details, including his home address, had been posted on the Canadian-based Mirotvorets website, created with the initiative of Anton Gerashchenko, the Ukrainian deputy minister of internal affairs. The people listed on it are recommended for liquidation and arrest, and the total number of people listed are in the tens of thousands.

According to many experts, it was the listing on the site and the publication of the home address that prompted the murder of Oles Buzina, Oleg Kalashnikov, and many other opposition figures by members of the Ukrainian ‘death squads’.

Back in 2015, Georgiy Tuka, who participated in the creation and operation of the site, stated that, of the people listed on the site, “more than 300 were either arrested or destroyed,” the report states.

When in April 2015 the Ukrainian parliament’s Commissioner for Human Rights Valeriya Lutkovskaya launched an effort to shut the list down, the then-adviser to Minister of Internal Affairs Anton Gerashchenko threatened her position and stated that the work of the site was “extremely important for the national security of Ukraine.” He said that “anyone who does not understand this or tries to interfere with this work is either a puppet in the hands of others or works against the interests of national security.”

So the website remains active, with Ukraine’s security service reportedly stating that it did not see any violations of Ukrainian law in the activities of the Mirotvorets website.

Ukrainian President Volodymyr Zelensky, too, has refused to have the website shut down, ironically claiming that it’s wrong to interfere with the work of websites and the media.

Let’s remember that in Ukraine, untold numbers of journalists, activists and civilians have been imprisoned, and killed, for their crimes of voicing criticism of the government and neo-Nazi groups.

Ukraine isn’t the only country to host such a hit list. Although Stop the ISM (International Solidarity Movement) – the project of crazed US-based journalist, Lee Kaplan – named activists, including myself, for our crimes of reporting on Israel’s brutal bombardment of Gaza in 2008/09, the website has since changed format and is far less detailed. But cached versions show the extent of its insanity, including a clear call for our murders:

“Number to call if you can pinpoint the locations of Hamas with their ISM members with them. Help us neutralise the ISM that is now definitely a part of Hamas since the war began.”

Others on the kill list were named for their crimes of reporting Israel’s systematic abuse and killing of Palestinians. Their personal details, including passport information, were published.

An article on this heinous website noted: “The dossiers are openly addressed to the Israeli military so as to help them eliminate ‘dangerous’ targets physically, unless others see to it first.”

Although arguably that website was the project of one lunatic and their allies, the fact that for many years it stayed active and called for the murders of international peace activists speaks volumes on America’s own values.

I’m sure these two hit-list examples are not isolated ones. Quite likely, there are similar lists targeting journalists reporting on the crimes of other countries. But they are the height of absurdity, and fascism: targeting people whose reporting aims to help persecuted civilians.

Meanwhile in Donbass, Ukraine reportedly continues its shelling of civilian areas. Recently in Gorlovka, a northern city hammered by Ukrainian bombing over the years, a mine blew off part of a woman’s leg as she gathered mushrooms.

In spite of the hit list, journalists, rightly, continue to report on these war crimes.