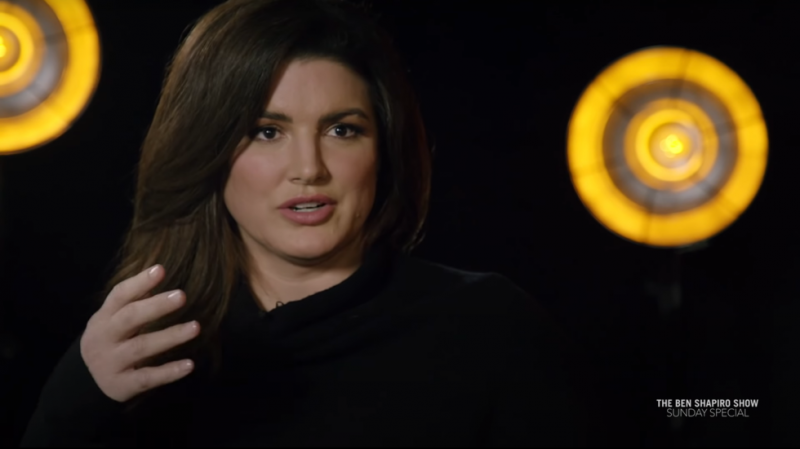 The former MMA fighter, who was fired from the Disney+ TV series ‘The Mandalorian’ earlier this month because of her social media posts, said she couldn’t back down and issue a disingenuous apology after watching other actors steamrolled for politically incorrect views. She anticipated her firing coming, after months of attacks from the cancel mob, and decided to “go down swinging.”

“My body’s still shaking, it’s still devastating,” Carano said in an interview posted Sunday with Daily Wire host Ben Shapiro. “But the thought of this happening to anybody else, especially somebody who could not handle this the way I can, no, they don’t get to do that. They don’t get to make people feel like that.”

Carano learned of her February 11 firing online, then signed a contract the next day with the Daily Wire to produce and star in her own feature-length movie. Both parties to the deal saw it as a way to send a message against cancel culture.

“Little girls and little boys who are not getting… a good fair shake at growing up right now,” Carano said. “If I buckle it’s going to make it OK for these companies, who have a history of lying, to be lying and to do this to other people. They’ve done it to other people, and I’m not going down without a fight.”

Carano, a Las Vegas native, has been a fighter all of her life – so much so that in 2006, she made history by competing in Nevada’s first sanctioned female MMA bout (she won in 38 seconds). She said she never started a fight and often walked away from conflicts when she was the target, but she stood up for other people when they were being abused. That’s part of why it was so hurtful when her social media posts were, in her view, purposely misrepresented as bigoted.

“I have gone out of my way my entire life not to be hateful,” Carano said. “I mean, yeah, I fought in the ring, and I do have hot blood, but it’s usually hot blood when it goes with people being bullied. And when I saw people being bullied that were silenced and scared to speak…

Carano, who spoke out about topics ranging from election fraud allegations to pronoun rules, said she tended to get in most trouble over social media posts that were meant to make people think, such as the Instagram message that apparently was the final straw for her bosses at production company Lucasfilm and parent company Disney. The post likened the demonizing of people for their political views to how Nazi Germany’s government turned people against their Jewish neighbors – eventually making it possible to carry out the Holocaust.

Shapiro argued that there was nothing anti-Semitic about Carano’s post because it identified what was done ещ the German Jews as inhumane and warned against letting such an atrocity happen again, but Carano said she learned that there should be more sensitivity in invoking the Nazis. “When you say the world Nazi and you call someone a Nazi, you need to have a little bit more respect on that,” she said. “That’s not what I was doing. I was saying we as a people. I have love for everyone.”

Carano became more engaged on political issues last year, after realizing that “maybe the adults don’t have it all under control.” She changed her Twitter profile to include “beep/bop/boop” in the space where leftists typically list their preferred pronouns, resulting in what she called a “crazy meltdown.”

Carano’s then-publicist told her to issue an apology. After explaining her thinking to the “LGBTQ section” of the public relations firm and going back and forth with advisers on a proposed apology, the Disney-Lucasfilm folks rejected her statement. “They said it wasn’t apologetic enough.” They also tried to make her have a Zoom meeting with about 40 LGBTQ company employees, many of whom Carano said had been slandering her online.

Disney later sent a media trainer to Carano’s house, who chided her for trying to respond to emotional responses with logical reasoning. Meanwhile, Disney reportedly dropped plans for a spinoff that would feature Carano as a bigger star, and she sensed that executives were looking for an excuse to fire her.

“I’ve been through so much, and I’ve seen so much… bullying that’s been taking place,” Carano said. “And I saw it before. I’m not the only one that’s ever been bullied by this company, and I know that. I know that so deeply.”