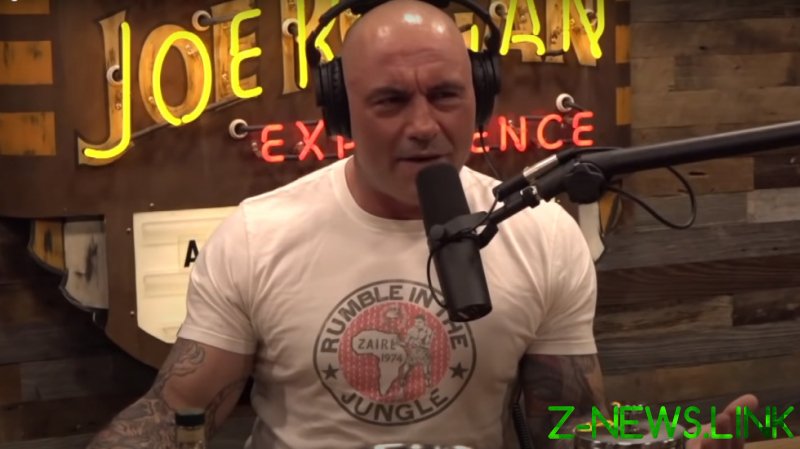 Spotify’s number-one podcaster took to his show on Thursday to clarify comments made on a previous episode, where he suggested vaccination may not be necessary for groups less vulnerable to the virus, such as healthy 21-year-olds or younger teenagers and children.

“The thing about… people being upset at me – I’m not an anti-vax person. In fact, I said I believe they’re safe, and I encourage many people to take them. My parents were vaccinated,” Rogan said.

I just said I don’t think that if you’re a young, healthy person that you need it.

Though he largely stuck to that stance, the 53-year-old fight commentator said critics had pointed out the risk that even the young and healthy could spread the virus to other, more vulnerable people. “That makes more sense, but that’s a different argument; that’s a different conversation,” Rogan went on.

His original hot-button statement came on an April 23 episode of the Joe Rogan Experience, where he spoke at length about Covid-19, inoculations and vaccine passports with comedian and libertarian commentator Dave Smith. It didn’t take long before the show prompted scorn from detractors online, with even White House coronavirus advisor Anthony Fauci weighing in.

President Joe Biden’s communications director, Kate Bedingfield, was even more snarky in her response, asking “did Joe Rogan become a medical doctor while we weren’t looking?”

“I’m not sure that taking scientific and medical advice from Joe Rogan is perhaps the most productive way for people to get their information,” she added.

Rogan apparently agrees with that statement, acknowledging on Thursday that “I’m not a doctor. I’m a f**king moron,” and that he should not be considered a “respected source of information.” Nonetheless, he said “at least I try to be honest about what I’m saying.”

Despite the uproar over the episode, including demands that Spotify send it down the memory hole and delete it from Rogan’s catalogue, the streaming platform has so far given no indication that it will do so. A source cited by the Verge earlier this week noted that the episode is within Spotify’s policies, as it does not outwardly advocate against vaccines or urge listeners not to take them.

The bout of controversy is not the first time Rogan enraged critics with commentary on vaccines, previously kicking off a wave of anger in February after saying that he would not receive a coronavirus immunization because he felt he did not need one. He has since clarified that, at one point, he was scheduled to receive the Johnson & Johnson shot, but other obligations conflicted with his appointment. Not long after, he said the J&J vaccine rollout was temporarily halted in the US over multiple reports of dangerous blood clotting in recipients, though health authorities cleared it to resume last week.