Home / WORLD / I’m not a conspiracy theorist, but how does a bloke in a Chewbacca bikini outwit the nation’s finest and storm the Capitol?

I’m not a conspiracy theorist, but how does a bloke in a Chewbacca bikini outwit the nation’s finest and storm the Capitol? 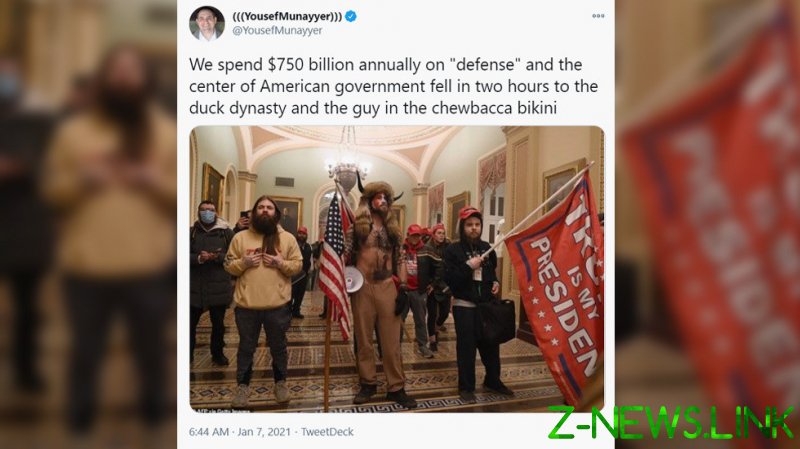 I watched the astonishing breaking news from Washington yesterday like billions all over the world, our mouths agape, as the citadel of Western democracy was breached – Capitol Hill falls to the angry mob – and pondered one question.

In a country that spends about 900 billion dollars a year on security and defence, that has made its name as the (often uninvited) police officer of the world, that loves going into other countries and ‘helping’ prop up one regime over another, or get rid of another it doesn’t like, all in the name of ‘democracy’… how is it possible that a couple of thousand of badly dressed and quite frankly weird folks break into the USA’s centre of power?

I’m not a political or a historical expert on the USA, but I do love the country. It has always fascinated me – the opportunity, the dream, its brashness and its bollocks – and I especially love Las Vegas. The USA knows how to put on a good show –  it’s what they do best – and yesterday’s was right up there with them.

Because that’s what it was, in my view: a show. A stage-managed event. That’s the only explanation as to how this ramshackle group of people got into the Capitol building to disrupt political business regarding the transition of their most sacred of symbols, the POTUS.

I watched the reruns of President Trump’s confused and quite mental rallying call to his followers earlier in the day – where he gave them the green light to march on Capitol Hill. I watched talking head after talking head compare the policing of the Trump supporters protest to that of the Black Lives Matter protests a few months ago – and only a fool would argue there was no difference.

At the BLM protest there were thousands of armed security ready and willing to crack heads and use weapons against protesters. Yet at the Trump rally – as far as I could see – there were a few blokes with radios in their hands running about. It’s not as if this showdown had not been written about and warnings given that Trump supporters would try to kick off on January 6 – it was all over the media for days beforehand.

So I reckon the FBI, the Washington police, the Capitol Hill police, the national guard, etc. must have known of the potential for trouble, right? My granny would have heard about it and could have done a better job sorting the security. Yet the nation’s finest was hoodwinked by a bloke in a Chewbacca bikini who was now standing in the debating chamber, alongside a bloke in a Camp Auschwitz hoodie and others waving Confederate flags?

I imagine that for most US citizens seeing your capital city in lockdown and the mayor ordering a 6pm-6am curfew, this symbolic act of protesters breaching a place that should be secure and attacking the very heart of ‘democracy’ must have been truly shocking.

As a sociologist, I have been taught and trained in what we call ‘mapping the field’, meaning looking at the situation, assessing the power dynamics, seeing who are the winners and losers, and thinking critically about that.

I know this particular field is a complicated one – the outgoing President Donald Trump is a vainglorious and narcissistic man, and his rants, lies and propaganda and purposefully divisive methodology has truly damaged his nation over the last four years. He’s caused greater divisions in an already divided society, setting himself up as ‘the anti-political politician’, and the result has been chaos, as his inept handling of the Covid pandemic demonstrated.

He promised to clean up Washington, to drain the swamp, and to vanquish ‘the deep state’. But he failed miserably. And what if Wednesday, 14 days before he was due to depart the White House, was the deep state’s revenge, a stage-managed show designed to humiliate him and his supporters, and to reveal them in their true, disgusting colours?  And put paid to ‘Orange Man’ forever?

I’m no conspiracy theorist, but it makes sense to me. Certainly, my sociological analysis thus far in this ever changing and dynamic situation is that the unleashing of the angry mob onto Capitol Hill was a good day for the forces of conservatism, the Washington elite, both Republican and Democrat, who have loathed Trump with a passion since he dared raised his coiffured head above the political parapet.

So a good day for the political class – and a bad day for Donald Trump. He’s been forced to accept that the Joe Biden presidency must go ahead smoothly, while still smarting and whining and not accepting that he lost the election, and  – oh, imagine the withdrawal symptoms – not being able to tweet. A cynic might say that the day Trump’s mob was conveniently allowed to attack America’s democracy was the day that Trump was given enough rope to hang himself. Noose work, chaps.