Home / WORLD / I’m no fan of Donald Trump, but his peace deals in the Middle East are a diplomatic triumph. Why is MSM virtually ignoring them? 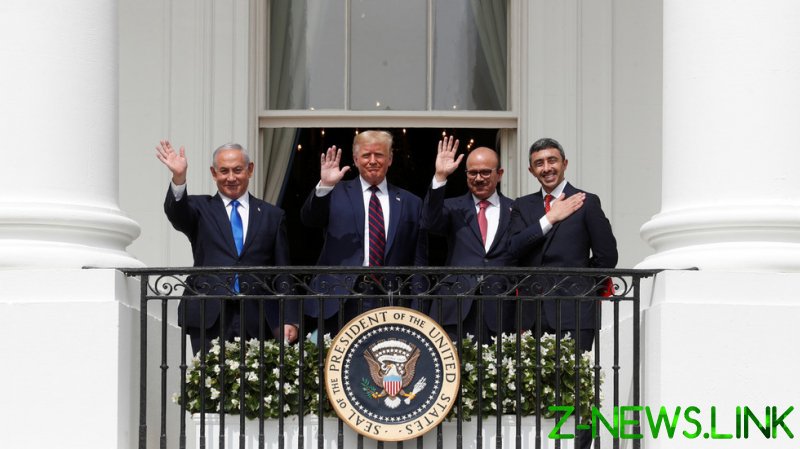 For his efforts in the September 15 treaty between Israel, United Arab Emirates (UAE) and, later, Bahrain, the US president has gotten a nomination for the Nobel Peace Prize. But much as his enormous ego would absolutely love that award, it’s unlikely the deal will get him across the finish line.

For starters, these talks were brewing before Trump came on the scene and the complete details have yet to be hashed out. And to his many critics, many of them in mainstream media and academia, Trump is seen as a national embarrassment who is causing civil strife in the country. For them, granting him a Nobel peace prize is seen as laughable.

It’s true that the rapprochement between the UAE and Israel was underway before Trump won in 2016. The small Gulf state, an international oasis with enlightened leadership – and one that opened its arms to this reporter during a visit in January – started linking with Israel in 2015 when the Jewish state opened up diplomatic offices in Abu Dhabi. After that, Israeli athletes competed there, and Israel has long planned to be part of the World Expo in Dubai in 2021.

But the newly-minted deal may create a domino effect: Bahrain has signed a similar agreement that has few details. And others may follow: Oman, Morocco and Saudi Arabia are possibilities. Saudi? Yes, the country has so far said nothing either way about the treaties, leading insiders to think that it quietly blesses them; already the Saudis are allowing Israeli jets to fly over their airspace.

The “love” between the UAE and Israel has come out of the closet and is present for all to see. The two nations, which share a mutual distrust of Iran, will now be able to openly trade military secrets and weapons – things that would work to deter any aggression in the region. The UAE can get access to Israeli technologies such as those that protect cyber secrets. And Israelis will have a hot new vacation destination – the beaches and fancy hotels of Dubai.

So isn’t all that worthy of a Nobel peace prize? After all, Henry Kissinger won it in 1973, the same year he spearheaded the secret US bombing campaign against Cambodia, which killed hundreds of thousands of people. The academics, although generally praiseworthy of the diplomatic breakthrough, are adamant it shouldn’t.

“The Gulf Cooperation Council countries most certainly do not move in lockstep, but there has always been a ‘first mover’ problem and after the UAE agreement, it was inevitable that other states would follow suit. I’d be astounded if there aren’t more to follow,” Jonathan Cristol, research fellow in the Levermore Global Scholars program at Adelphi University, told RT.

“But these deals do not usher in some sort of new era of peace and harmony,” he warned. “Bahrain and UAE are not Lebanon and Syria: they have never fought a war against Israel. This is a long-overdue recognition of reality and it will make it easier to further develop elite business and security ties – and that is a good thing.”

Henri Barkey, another Middle East expert and professor of international relations at Lehigh University, told RT: “The Trump administration should be in these countries’ debt because they gave it an excuse to gloat about a diplomatic achievement. If [the White House] gets the credit, it may be in selling the Israeli right-wing the idea that annexation of the West Bank is not worth it. Also, it happened faster because the Trump administration is not interested in details. A Biden administration would have taken its time to look at all the ramifications.”

And what about the Palestinians and their struggles? Not everyone thinks the Abraham Accords are worthy for that reason. Atalia Omer, a professor of religion and peace studies at Notre Dame University, told RT: “The main problem behind this ‘peace deal’ is it ignores the Palestinian struggles and demands. The impetus is also economic and intends to expand arm trades. Indeed, this is not a peace agreement at all but an economic and military agenda.”

The Emirates, however, say that the treaty gives them the leverage to prevent the Israelis from annexing more of the West Bank – something vital to the Arab world and, if successful, would cause more peace agreements to break out. But the UAE’s overriding worry are the threats from Iran, Syria and Yemen and this has driven the partnership.

Russia may also have played a vital part in the background in bringing the UAE and Israel closer.

Israel, which is flush with natural gas resources, has to look outside of the Arab world for its oil and gets much of it from Russia, which has close ties to the Jewish state. The two nations have a free trade agreement and bilateral commerce exceeded $5 billion in 2018 and 2019.

The Russian-Israeli relationship is largely unknown in the West, according to Robert Amsterdam, an international litigator living in Turkey. He believes President Putin is the first Russian leader to be “incredibly sensitive” to the needs of the Jewish people and to Israel, which is now home to a huge Russian population. Putin grew up amongst a large Jewish community, to which he remains endeared. It’s a bond cherished by Israel, Amsterdam says, which will continue to look to Russia for its natural resources – and peace.

To that end, Amsterdam says that Russia’s role in Syria is transactional – that it is not about to do anything inimical to its self-interest. But Russia has broader interests and influence. Cooling regional tensions while keeping Syria and Iran in check is paramount to these: peace in the Middle East is a team effort.

“The Abraham Accords is a tectonic shift for the Islamic world,” said Amsterdam. “Geopolitically, it is a significant hit to Iran. It is a big deal. But does Trump deserve a Nobel Peace Prize for it? Trump has been a disaster for world peace and offering this guy this distinction would be a crime.”

Perhaps such animosity has also fuelled the fact that this big breakthrough has, curiously, not received much coverage in the mainstream media since the initial news broke.

Maybe that has to to do with the fact that one bombshell story seems to follow another with Trump: now it is his taxes. Before that it was Bob Woodward’s book. Then the allegations that he repeatedly mocked US soldiers killed in battle. Or maybe, just maybe, a Democrat president who pulled off this sort of diplomatic victory for peace in the Middle East might have got a teeny bit more airtime for it?

So there’s only one thing for it, Mr President. If you really want that Nobel prize thing, you’d better use your presidential powers to bring about peace in the US. Now that would truly be a thing…