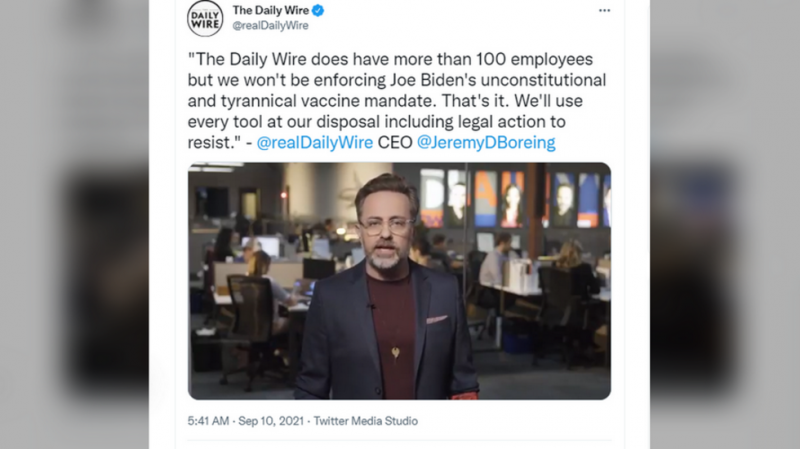 “The Daily Wire does have more than 100 employees but we won’t be enforcing Joe Biden’s unconstitutional and tyrannical vaccine mandate,” the website’s co-founder and co-CEO Jeremy Boreing said in a video on Twitter. “That’s it. We’ll use every tool at our disposal, including legal action, to resist.”

Boreing argued that the president’s effort to enforce vaccination is undemocratic and pointed to a report by the US Centers for Disease Control and Prevention (CDC) that more than 70% of American adults had already received at least one dose of the vaccine by early August. “So Joe Biden has no compelling reason to encroach on our liberties,” he said.

The Daily Wire boss said he personally supports vaccines against the coronavirus. “They seem to do a pretty good job preventing hospitalization and a great job preventing death from Covid-19. That’s terrific,” he said. “If I were a dictator, I’d probably make you get it. But I’m not a dictator, and neither is Joe Biden.”

The website, which describes itself as “one of America’s fastest-growing conservative media companies,” is a home to podcasts by commenters Ben Shapiro, Michael Knowles, Andrew Klavan, and Matt Walsh. Stories published by the Daily Wire were receiving more likes, shares and comments on Facebook than any other news publisher by a wide margin, according to a July analysis by NPR.

Under Biden’s new plan to fight the pandemic, companies with 100 or more employees have to ensure their workforce is fully vaccinated or have any unvaccinated worker get a negative Covid-19 test at least once a week. Businesses that do not comply risk getting fined, reportedly, up to $14,000 per violation.

Announcing the new rules on Thursday, Biden said the measures are directed at the nearly 80 million Americans who remained unvaccinated. “In a country as large as ours, that’s 25% minority. That 25% can cause a lot of damage – and they are,” the president said, adding that the unvaccinated are overcrowding hospitals, leaving no room for patients with illnesses unrelated to Covid-19.

The vaccination mandates were blasted by Republican Party politicians, with governors of states like Georgia, Texas, and Arizona pledging to fight against the regulations. Georgia Governor Brian Kemp promised to use “every legal option available to the state of Georgia to stop this blatantly unlawful overreach by the Biden administration.

“These mandates are outrageous. They will never stand up in court. We must and will push back,” Arizona Governor Doug Ducey said.

The Republican National Committee (RNC) head Ronna McDaniel warned that the organization will sue the White House as soon as the new rules take effect. “Like many Americans, I am pro-vaccine and anti-mandate,” she said.

Biden’s chief medical adviser Anthony Fauci, meanwhile, told NBC News that mandates are necessary to push resistant Americans to get the shot. “Hopefully, they will do it willingly. If not, there will have to be things that will essentially put pressure on them,” Fauci argued.

“I believe, once we start doing that, you will see more and more willingly get vaccinated.”