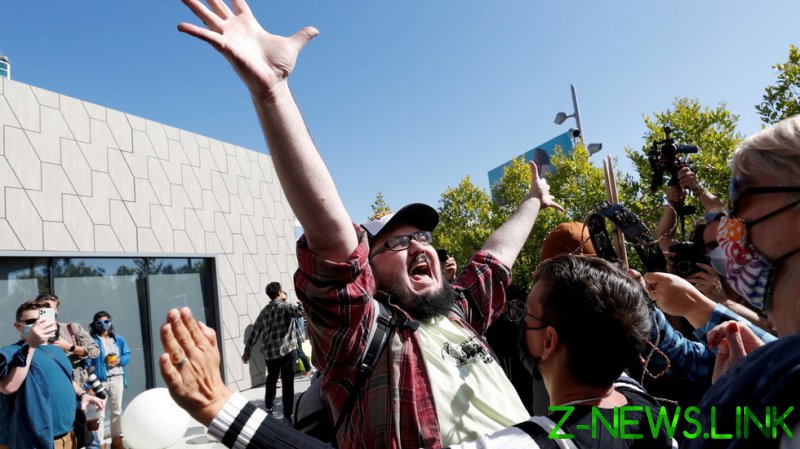 Scores of Netflix employees walked out of the company’s Sunset Boulevard office on Wednesday and took to the sidewalk, where they chanted, “trans lives matter” and held up signs protesting Chappelle’s latest comedy special, ‘The Closer’.

Activist and organizer Ashlee Marie Preston said creators need to hold Netflix accountable in the way that shareholders do. She claimed, in a moment that has already earned backlash, that she was there to see Chappelle’s “masters.”

“He’s clearly sold himself,” Preston said of the African-American comedian. “Since he can’t do the right thing, I’m here to talk to his master today and those are the people who signed the paycheck.”

She vowed not to stop protesting “until justice is brought,” and dismissed the charge that the walkout was an example of “cancel culture.” She argued that the activists invited Chappelle to discuss the issue with them, but he has shown no interest in the dialogue.

The activist also slammed Chappelle as “an oppressor,” while at the same time noting that, as a black man, he was part of the “oppressed” community.

Wednesday’s gathering also saw counter protesters show up to support Chappelle. Some held signs with messages such as ‘Jokes are Funny’ and ‘We Like Dave Chappelle’.

One of the latter signs was destroyed by an anti-Chappelle protester, a moment captured on camera that has quickly gone viral.

In the clip, the man holding the ‘We Like Dave’ is confronted by a rival protester, who then takes his sign, and stomps on it, leaving him with a broken handle.

“I’m just here to say jokes are funny, and Dave Chappelle is a funny guy,” his supporter can be heard as saying.

Chappelle has faced accusations of being transphobic since his special debuted earlier in October. Trans-rights activists have been up in arms over the segments where the comedian discusses his problem with woke culture and refers to gender as a “fact”. The comedian does not express any opposition to transgenderism in general and says he supports an individual’s right to change their gender, however.

Chappelle’s supporters have called the outrage overblown, while the special has remained a popular stream on Netflix, earning high marks among audience members. Some critics believe, however, that Chappelle could cause real world harm with his words and Netlflix is providing him the platform and financial support to do so.

Netflix CEO Ted Sarandos initially defended the special, saying that he believes strongly that its content “doesn’t directly translate to real-world harm.” Faced with a mounting backlash ahead of the walkout protest, Sarandos told Variety on Tuesday that he “screwed up the internal communication” on the special, but stressed that there are no plans to take it down.

He doubled down on his initial assessment that the show does not “fall into hate speech,” adding that not so many people actually demanded its removal.

“I don’t believe there have been many calls to remove it,” he said.

In a Wednesday statement, however, Netflix also expressed support for the protesting employees.

“​​We respect the decision of any employee who chooses to walk out, and recognize we have much more work to do both within Netflix and in our content,” the company said.