Home / WORLD / ‘I’m gonna bang his a** up’: Dana White struggles to separate Lewis and Gane at fiery heavyweight face-off before UFC 265 (VIDEO)

‘I’m gonna bang his a** up’: Dana White struggles to separate Lewis and Gane at fiery heavyweight face-off before UFC 265 (VIDEO) 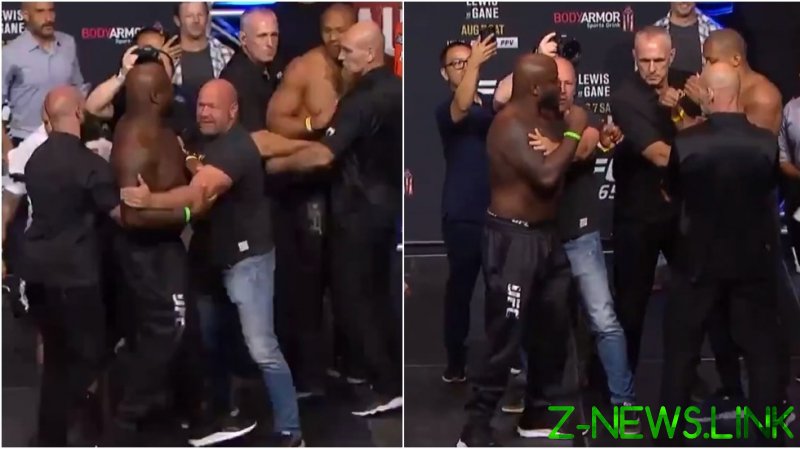 Appearing in front of a raucous home crowd, knockout king Lewis looked fired up as he pounded his chest on the scales for the ceremonial weigh-in before marching aggressively towards Gane.

UFC boss Dana White struggled to hold back ‘The Black Beast’ before the pair eventually settled into a staredown, although Lewis still seemed to be simmering on the edge of exploding.

The pair clash for the interim heavyweight strap at the Toyota Center as 36-year-old fan favorite Lewis aims to halt the meteoric rise of his undefeated French opponent.

Lewis – who holds the joint record for the most KOs in UFC history with 12 – tipped the scales at 264.5lbs, while Gane weighed in at 247lbs.

“I’m gonna bang his ass up,” Lewis told UFC pundit Jon Anik after the heated last staredown, much to the delight of those in attendance.

Gane, who is 9-0 and bidding to become the first French-born UFC champion, appeared more composed ahead of the biggest occasion in his octagon career.

Former title challenger Lewis rolls into the bout on the back of four straight wins, including a Performance of the Night second-round KO of Curtis Blaydes in his last outing in February.

Gane’s last contest was an impressive unanimous decision victory against Russia’s Alexander Volkov at the end of June, and ‘Bon Gamin’ has suggested that test was sterner than the one he’ll face in the form of Lewis.