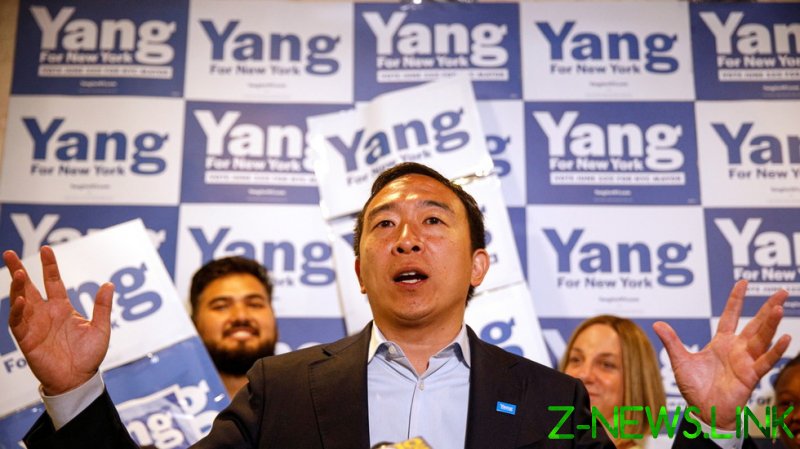 “You all know I am a numbers guy. I am someone who traffics in what’s happening by the numbers, and I am not going to be the next mayor of New York City based on the numbers that have come in tonight,” Yang told his supporters during a brief presser on Tuesday night, adding “I am conceding this race.”

The concession comes after Yang, who was previously seen as a frontrunner, dropped to fourth place in the early primary results, garnering just 11.7% of the vote with more than 85% of precincts reporting results. Candidate Eric Adams remains in first place, with 30.7% voting in his favor so far, while Maya Wiley and Kathryn Garcia trail behind with 21.6% and 20.7%, respectively.

Yang rose to public prominence after a failed 2020 presidential bid, during which he promised a universal basic income of $1,000 a month to every adult American. While he was once seen as a strong competitor in the mayoral race, enthusiasm for the former tech entrepreneur has since waned.

He dealt a blow to his own campaign last week with controversial remarks about the mentally ill, stoking outrage after arguing that New Yorkers “have the right to walk the street and not fear for our safety because a mentally ill person is going to lash out at us.” Though he later positioned himself as an “advocate for mental health,” the comment was nonetheless widely panned.

In May, during escalation of violence between Israel and Palestinians, Yang landed himself into trouble after tweeting that the people of New York stand with their “brothers and sisters in Israel who face down terrorism and persevere.” Following the backlash, he admitted that the tweet “failed to acknowledge the pain and suffering on both sides.”

For the current city race, New York is using a ranked-choice voting scheme for the first time, allowing voters to rank their top five picks on ballots, rather than selecting a single candidate to win. With the new system in place, as well as tens of thousands of absentee ballots set to be counted early next month, a winner likely won’t emerge for several weeks.