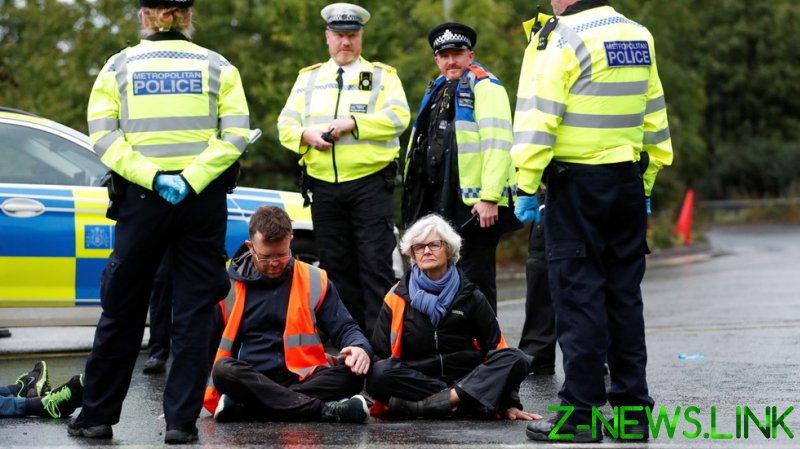 “We can’t have people’s lives unfairly disrupted by those who are blocking motorways, gluing themselves to the tarmac,” Johnson said in a video statement published on Twitter, referring to the latest series of protests staged by Insulate Britain, a splinter group of Extinction Rebellion.

“We’re taking action on illegitimate protestors who are unfairly blocking motorways and disrupting people’s lives. We’re giving the police the measures to stop them, with protesters facing six months in jail or unlimited fines,” he wrote in a tweet with the video attached.

Earlier this week, members of the group, which demands better insulation in British homes to reduce climate change, blocked several major highways around London, including the M25, M1 and M4. On one such occasion, several activists glued themselves to the road before being arrested by the police.

From now on, such actions would be met with a tougher government response, Johnson announced. “They can either face six months in jail or unlimited fines,” Johnson said. The police would also be allowed to conduct a “stop and search” of those carrying superglue or any other means that could be used to block traffic, he added.

Johnson described it as “unfair” for people “who are not legitimate protesters” to be able to “disrupt people’s lives” and “damage the economy” in this way. Earlier, the British media had reported that Home Secretary Priti Patel was set to announce similar measures at the Tory Party conference, which began today in Manchester.

Ahead of the event, Patel accused the climate activists of deploying “guerrilla tactics” that obstructed people’s “day-to-day business”, and said the government would not tolerate it.

While the climate activists’ tactics are indeed controversial, many Brits did not buy the idea that the Establishment was extending policing powers because it cared about the impact on ordinary people’s daily lives. And there was apparently no shortage of those who took Johnson’s words about “illegitimate protesters” to heart.

People took to Twitter to ask the prime minister to clarify whom exactly he considered to be “illegitimate” when it came to protests. Others asserted that there was “no such thing as an illegitimate protest” and called Johnson’s choice of words “particularly chilling” for anyone who “believes in democracy.”

One poster opined that Downing Street wouldn’t condone any action undertaken in protest unless it were by a member of the political elite. Another commenter went so far as to suggest Johnson “would have opposed the Suffragettes”, had he lived in that era.

Critics noted that London was more than eager to support pretty much any protests, including violent ones, in distant lands such as Syria, Iran or India, but took a completely different stance when faced with peaceful demonstrations at home.

There were some who agreed on the need for tougher measures to tackle radical climate activism, however. They accused the protesters of “blocking ambulances” and called the activists’ approach “petulant and childish.” Nonetheless, that did not necessarily mean they were satisfied with the government’s response, as at least some of them demanded actions instead of words.

The activists in question appeared to be undaunted by the threat of new sanctions. “Unfortunately, the fear of losing British society as we know it is much greater than the punishments being threatened by our government,” a spokesman for Insulate Britain told the Independent on Sunday.