Home / WORLD / I’ll likely only see my family on a screen from now on, because I don’t want the Covid jab. What happened to ‘my body, my choice’?

I’ll likely only see my family on a screen from now on, because I don’t want the Covid jab. What happened to ‘my body, my choice’? 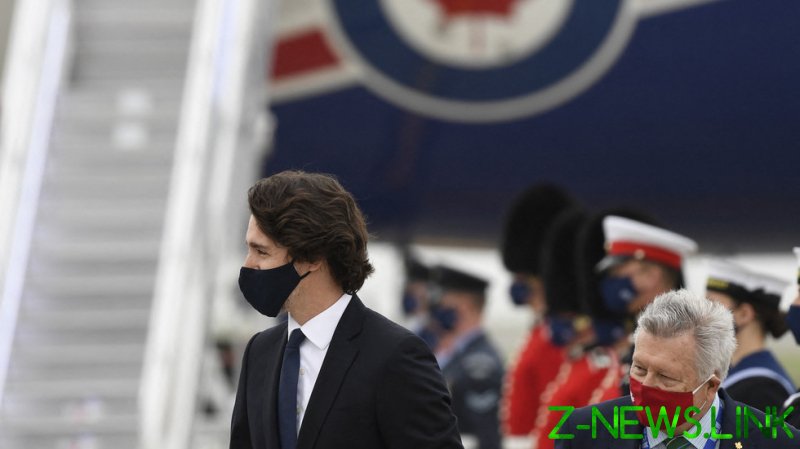 My country, Canada, has chosen to implement increasingly draconian and frankly unscientific policies in the name of ‘protecting’ people. What Canadian authorities are really doing is ensuring an uptake of the experimental jabs. Don’t want to take them? No worries, but you’re not welcome in Canada.

Recently, my RT colleague, Rachel Marsden, described her anguish at being forced to turn away from her country and family because Canada has decided it is the ‘science police’ and has decided which ‘science’ matters.

She wrote, “I committed the apparent violation of trying to re-enter my own country with proof of naturally acquired Covid-19 antibodies made by my own immune system post-recovery rather than those generated by the manmade Covid-19 vaccine about which much is still to be learned.” She noted that even her doctor had advised her against vaccination. But, for Canada, that is apparently irrelevant.

In an email, she explained that Canadian customs demand a positive PCR test taken more than two weeks ago and less than three months ago as proof of having had Covid, thus having immunity.

In her case, she didn’t have that positive PCR test because she didn’t notice symptoms at the time.

“Instead, my immunity was confirmed post-recovery via two laboratory tests for Covid antibodies taken nearly 5 months apart and proving that my Covid antibody levels are significant and also haven’t budged at all between the two tests. My doctor certified this result last month in a note with the heading, ‘Covid immunity certificate’.”

Marsden was ordered to comply with a three-day stay at one of Canada’s Covid internment hotels, costing roughly Can$2,000, plus two weeks’ quarantine. The other two options were to pay a roughly $6,000 fine if she simply walked out of the airport, or to book a flight back out of Canada – the cheapest option.

The anti-science aspect of Canada’s policies in refusing her natural immunity indicates that Canada is more interested in pushing vaccinations than public health.

And, as she wrote, “The Canadian government, by behaving in this manner, is routinely criminalizing those with Covid antibodies that are not derived from a manufactured experimental vaccine.”

Why I might never be able to return to Canada

When all of this started early last year, I had just left Canada for what I thought would be a maximum two-month absence. That has turned into over a year and a half. Perhaps at Christmas I could have tried to return for a visit. But with Ontario (winner of the longest lockdown) so unpredictable, I was dissuaded by the thought of getting stuck there.

Six months prior, I had given up my apartment and had my belongings put into storage. Being stuck in Ontario would have meant a whole slew of logistical problems.  So, I opted to wait, hoping the lockdowns and quarantines would be lifted for a future visit.

That was my decision and I’ll have to live with it, and the realization that maybe I could have visited and seen my mother once more, but now I don’t see how that is going to be possible, the way Canada is heading.

Recently, travellers coming to Canada have been required, by law, to be vaccinated, which I have no intention of doing. My immune system is excellent. I spent half of last year walking around Damascus, including in extremely crowded marketplaces where there was no physical distancing and few masks. I did not get sick, and as such I am completely confident my own body could fight off Covid.

On the other hand, let’s assume I was exposed to Covid but did not suffer symptoms. According to Canada’s logic, and Rachel’s experience, my natural immunity would be void, because I did not obsessively get PCR tests every week in case I was positive (never mind that the test can give false positives).

Were I to be vaccinated, it would be with Russia’s Sputnik V vaccine. And although Sputnik V has been approved for use in 69 states and territories, Canada does not accept it, instead pushing Pfizer, Moderna, AstraZeneca, and Johnson & Johnson. I have no intention of taking any of those anytime soon, for good reason. My choice is not about being anti-vaccines, it is about being properly informed on the potentially serious risks the rushed experimental jabs being pushed on Canadians could pose.

Even the CBC reported on Canadians who are concerned about safety and side effects of vaccines, particularly the long term effects of the mRNA Covid shots, as they haven’t been put through years-long clinical trials. Pfizer, for example, hasn’t even been fully okayed by the US Food and Drug Administration. A point not emphasized enough, but which CBC inadvertently shed light on with its inclusion of a particular photo in its article, is the exemption vaccine makers have from liability.

We also learned in early August, according to the CDC, “Covid-19 vaccines no longer prevent transmission.”  In Iceland, four out of five in intensive care for Covid-19 are fully injected. And around the world, there are examples of adverse reactions, injuries, and deaths post-jab that could at the very least give pause to many people, were these reactions covered in media in the same hysterical way everything else to do with Covid has been.

As reported (via data released by the CDC), “411,931 reports of adverse events from all age groups following COVID vaccines, including 6,985 deaths and 34,065 serious injuries between Dec. 14, 2020 and June 25, 2021.” This doesn’t mean that everyone who gets the jab will experience side-effects, but some will, and wishing to avoid that risk is a choice I should be free to make.

Furthermore, we have incessantly been told to “trust the science,” but one doesn’t need to be an ‘anti-vaxxer’ to see the way government scientists have been elevated to the status of secular bishops, and those who disagree with them are spurned like heretics, and be a tad suspicious that their convictions might not be as indisputable as they claim. There are numerous experts speaking out against the experimental jabs, including epidemiologists, immunologists, virologists, vaccine researchers, and even the former vice president of Pfizer.

Those are enough reasons and concerns for me to make the decision to not take the jabs but, in a sane world, my refusal to not take a vaccine for a disease with a 99% survival rate should not bar me from the country in which I was born and raised. None of this is to say that anyone who wants to take the vaccine shouldn’t do so, but whatever happened to “my body, my choice?”