Home / WORLD / If YouTube’s block of RT’s German channels is about ‘misinformation’, when will MSNBC & CNN be banned for Russiagate conspiracies?

If YouTube’s block of RT’s German channels is about ‘misinformation’, when will MSNBC & CNN be banned for Russiagate conspiracies? 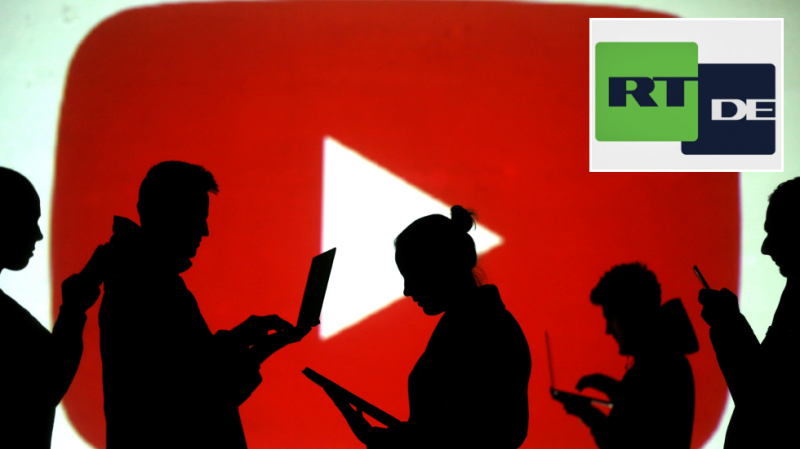 The decision, understood to have been taken over allegations the broadcaster tried to circumvent a ‘community standards strike’ handed down over ‘medical misinformation’, has seen Russia’s regulators rally round RT DE and its sister account, Der Fehlende Part.

Roskomnadzor, the Russian federal executive agency responsible for overseeing the media, warned Google it would be fined if did not end the suspension. At the same time, RT’s editor-in-chief, Margarita Simonyan, cautioned that this was “a declaration of media war against Russia by Germany,” and argued in favour of retaliatory restrictions against German media in Russia.

The closure of German-language RT channels should be seen in the context of growing censorship in the West and hostility to Moscow’s media outlets.

The rise of censorship in the West

Censorship has acquired a new dictionary over the past few years, with the rise of concepts such as safe spaces, cancel culture, and de-platforming – which are synonyms for striking down what people can and can’t say. Terms like hate speech and propaganda are defined increasingly loosely and censorship is therefore imposed on a wider and more inconsistent basis. The US government works hand in glove with the private tech giants to re-label censorship at platform policies.

There is especially a growing effort to legitimise censoring news and media related to Russia, which is usually conducted under the auspices of “countering propaganda.” We are constantly informed that Russia is launching a disinformation and propaganda campaign against the West to undermine its democracies. The response to this alleged threat by Western governments is a firm campaign of one-sided fact-checkers and efforts to out-propaganda the supposed propagandists.

The problem is that what is framed as counter-propaganda usually looks indistinguishable from propaganda, and merely undermines and ignores the arguments on the other side. Propaganda is the science of persuading an audience without reason by instead appealing to group psychology and emotional rhetoric. If propaganda entails “closing the mind to argument,” then countering propaganda implies appealing to reason by objectively presenting competing arguments.

British philosopher Bertrand Russell is known for arguing during the Cold War that countering communist propaganda did not necessitate simply censoring the Soviet Union, as such a move would merely give space for British propaganda. Instead, he envisioned counter-propaganda as facilitating all perspectives by, for example, organising a debate between Stalin and the Archbishop of Canterbury. By redefining propaganda as anything that presents Russia favourably – debates that give Russian arguments a platform and legitimacy are deemed dangerous and thus require censorship. Under this new definition of propaganda, even the Russian Sputnik V Covid-19 vaccine and Russian cartoons are considered propaganda.

It is only a year ago that Hunter Biden’s laptop scandal unfolded ahead of the US presidential election, purporting to reveal that now-US President Joe Biden was involved in corruption with Ukraine and China. Fearing that this revelation could cause Joe Biden to lose the election, the Biden campaign adopted the same Russiagate playbook as the Clinton campaign – blame Russia.

By labelling the entire scandal a Russian disinformation campaign, the media chose not to report on the matter while social media platforms outright censored the story from their platforms. Well, last week the evidence was in – the incriminating emails from Hunter Biden’s laptop were completely authentic and Moscow had absolutely nothing to do with it. Much like the conspiracy theories linking former President Donald Trump to the Kremlin and the tale of Russia placing bounties on US troops in Afghanistan – the disinformation came from the Western media.

In many cases, mainstream outlets have championed claims that were at the time unsubstantiated, and now fully discredited, without ever correcting themselves. American networks including MSNBC and CNN have played host to some of the most egregiously untrue Russia-gate conspiracy theories. Those, like Rachel Maddow, who unapologetically championed them, have never faced repercussions for their careers, and their sensationalist content still sits online proud as punch and without retraction or amendment. Accountability, it seems, is something reserved for other people.

Western states are also countering alleged Russian disinformation with ‘fact-checkers’. The problem is that these fact-checkers do not actually check facts, they check narratives, impose their own, and thereby operate as a Ministry of Truth.

Case in point, the EU fact-checkers label the reference to ‘coup’ to describe the events in Ukraine in February 2014 as Russian disinformation, as it was argued to supposedly have been a ‘democratic revolution’ and that former leader Viktor Yanukovich chose to leave the country voluntarily.

Actual fact-checkers would check objective facts: Did the OSCE characterise the election of President Yanukovich as free and fair? – Yes. Did the removal of Yanukovich from power violate the Ukrainian constitution? – Yes. Did the toppling of Yanukovich enjoy support from a democratic majority of the Ukrainian population? – No. Did the US and EU support the removal of Yanukovich? – Yes. Instead of fact-checking, the fact-checkers employ ambiguous and contradictory terms such as ‘democratic revolution’ to delegitimise the Russian position. Subsequently, these fact-checkers send an unmistakable signal to Western media that they cannot discuss the extent to which a coup occurred in Ukraine, as this can be considered peddling Russian disinformation.

The media landscape is polarising both domestically and internationally. Within the US, liberals who appear on conservative media platforms are chastised for their lack of loyalty to the group. Within Europe, the media polarises between pro-Brexit and anti-Brexit, or between pro-EU and anti-EU.

Groupthink is amplified and the subsequent polarisation implies that the nuances disappear as political questions are framed as a struggle between right and wrong, or good and evil. With the death of objective reporting, the solution for the audience to remain informed is a diversity of media – both CNN and Fox News, both The Daily Telegraph and the Guardian, both Haaretz and Al Jazeera.

The Western media acts in conformity with a heavy anti-Russian bias that reflects the alliance system and security architecture of a divided Europe. Those interested in Russian politics should by no means limit themselves to RT as the sole arbiter of truth, but RT is an important contribution to a severely polarised media landscape.

The Western media has exceptionally poor reporting on Russia, as it is ideologically constrained from recognising Russian security concerns. All political questions are filtered through the simplistic and outdated binary stereotypes of ‘democracy’ versus ‘authoritarianism’ that provides little if any heuristic value to understand the complexities of the socio-economic, political, and military conflicts.

The inability to recognise that the West can threaten Russian security makes it impossible to have any reasonable analysis of Russian foreign policy. By neglecting external threats and limiting the analysis of Russia to its internal characteristics, Russian policies can only be explained by referencing Putin’s belligerent personality or nostalgia for empire.

The information space is becoming a key battleground in great power rivalry, and for the sake of an informed population, we have to hope what some see as propaganda is countered with reason – not just more propaganda.