Home / WORLD / ‘If you love your country, you’re probably on the right’: NY Times panned after suggesting US flag now represents conservatism

‘If you love your country, you’re probably on the right’: NY Times panned after suggesting US flag now represents conservatism 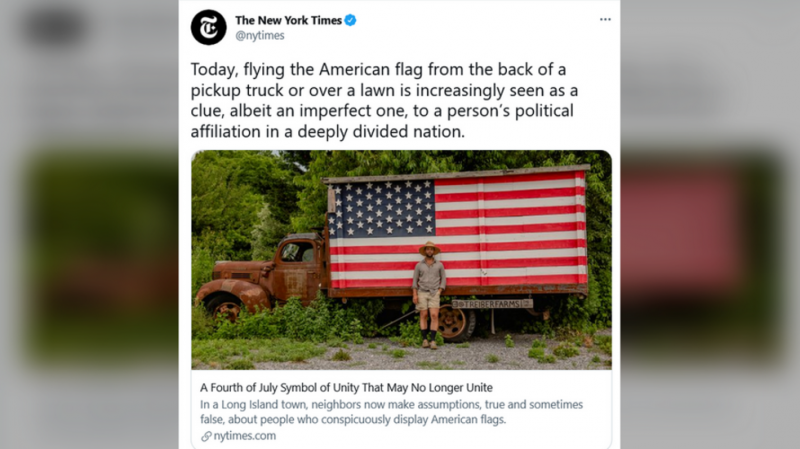 “Today, flying the flag from the back of a pickup truck or over a lawn is increasingly seen as a clue, albeit an imperfect one, to a person’s political affiliation in a deeply divided nation,” the Times said in an article on Saturday, the eve of the US Independence Day holiday.

The article went on to say the flag has become “alienating to some,” after it was embraced by supporters of former President Donald Trump. “And it has made the celebration of the Fourth of July, of patriotic bunting and cakes with blueberries and strawberries arranged into Old Glory, into another cleft in a country that seems no longer quite so indivisible, under a flag threatening to fray.”

Conservatives pounced on the article as an admission that their side now owns American patriotism. “Agreed,” self-described Christian traditionalist Theophilus Chilton told the Times on Twitter. “If you love your country, you’re probably on the right.”

Mike Hahn, formerly a social-media manager for Trump’s campaign, posted a similar take on the story: “The New York Times seemingly admitting that the GOP is the party of the American flag.”

Republican political consultant Derek Ryan argued that the Times got the story wrong, saying many residents in his predominantly Democrat neighborhood fly US flags. “The New York Times needs to stop publishing trash like this,” he added.

The Daily Caller, a conservative news site, quipped, “Trump broke all of your brains.” Other observers argued that the Times itself, as well as other mainstream media outlets, are what’s dividing America. “Why are you guys doing this to America?” the commenter asked. “You are all tearing it apart.”

America’s fault lines over flag-waving predate the political rise of Trump. Anti-war activists made flag-burning a common occurrence at protests against the Vietnam War. Ironically the war escalated under the presidency of Democrat Lyndon Johnson and full Democrat control of the both chambers of Congress. Kneeling protests during the playing of the “Star Spangled Banner” at sporting events — a tactic decried by Republicans and defended by Democrats – began in 2016.

Trump capitalized on such symbolism, declaring that flag burners should lose their citizenship or be jailed and that National Football League players who kneel during the national anthem should be suspended without pay.

The Times cited a YouGov poll that shows politically diverging views on the American flag. The survey, which was released in March, showed that 95% of Republicans are proud of the flag, compared with 64% of Democrats.

With its imagery of flags on pickup trucks and a church sign referring to America being created “under God,” the Times’ article appeared to stoke the political divisions. Some observers suggested that the story may reveal more about the newspaper than the flag-wavers it depicts.

“Today, singling out people for flying the American flag from the back of a pickup truck or over a lawn is increasingly seen as a clue, albeit an imperfect one, to a newspaper’s political affiliation in a deeply divided nation,” one commenter said, recasting the Times’ verbiage to make his point.