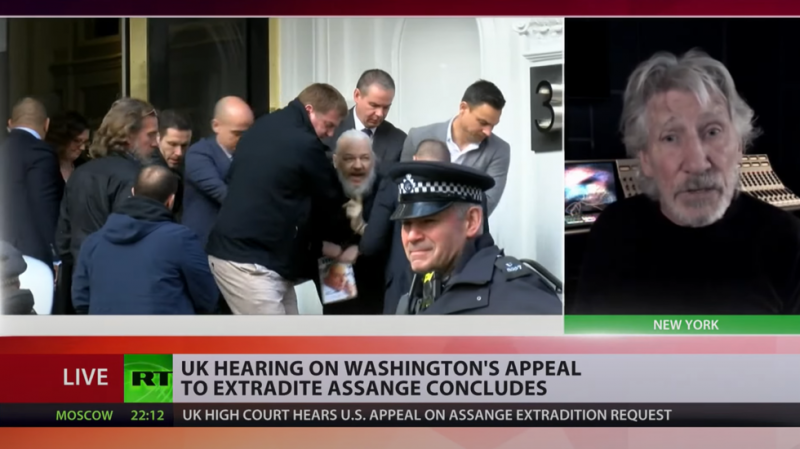 Though the UK High Court did not hand down a ruling after Thursday’s appeal hearing and is now taking time to consider a decision, Waters said he’s “deeply, deeply concerned” about how the case will play out, blasting the appeals process as a “kangaroo court.”

“It has nothing to do with justice or the arguments provided,” Waters told RT in an interview. “It is absolute nonsense that this man has been locked up a single day – whether it’s in the Ecuadorian Embassy or in Belmarsh.”

The WikiLeaks co-founder has been held in London’s maximum-security Belmarsh prison since 2019, arrested by UK authorities after spending some seven years in the city’s Ecuadorian Embassy under political asylum. Accused of violating the century-old Espionage Act by publishing classified material, Assange faces up to 175 years in prison if extradited to the United States and found guilty.

While District Judge Vanessa Baraitser initially declined Washington’s extradition request, citing concerns about Assange’s mental health and the risk he might commit suicide in an American prison, the US has since appealed, making its final arguments during Thursday’s hearing.

Waters blasted that original judgement as “mealy-mouthed,” arguing that Baraitser should have tossed the case and left no chance for an appeal.

US authorities have offered “assurances” that Assange would not be mistreated in American custody, but Waters insisted “they’re lying through their teeth,” citing indefinite detentions and torture at the US-run Guantanamo Bay prison in Cuba. Rights groups such as Amnesty International have also rejected the US assurances as paper-thin, also pointing to a less-than-stellar US human rights record.

The rockstar did note, however, that if the court decides to grant the US request, Assange’s defense team will have an opportunity for its own appeal, and “will get a chance to challenge all the ludicrous nonsense that’s gone on up until this point.” Regardless of the legal outcome, he urged supporters of Assange, WikiLeaks and the free press to “go on making as much noise as they can.”

“They should try to persuade their neighbors and their uncles and aunts and grandmas and grandpas and everybody they know to take to the streets to protest it,” he added.