Home / WORLD / If Jesus was on the Israeli-Palestinian frontline now, what would he do?

If Jesus was on the Israeli-Palestinian frontline now, what would he do? 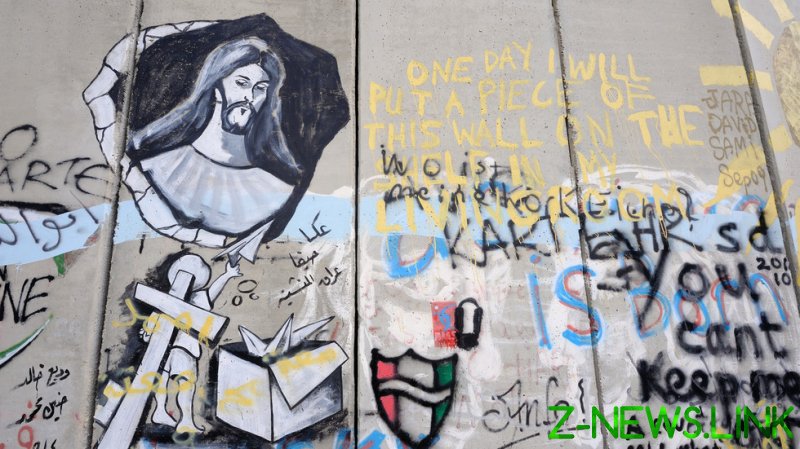 What would the Messiah do? Whose side would he be on? In Jerusalem, Palestinian sufferings are beyond question. Homes confiscated, people shot at, ethnically cleansed. Israeli soldiers are the aggressors – that much is clear. Would Jesus then unleash his righteous fury against them? Tricky because, don’t forget, he was not an Arab but a Jew. That side of his historical identity is fundamental. And the Israelis are Jews. What would Jesus do then? Could he fix it?

Taking my cue from Dostoevsky’s haunting tale of the Grand Inquisitor in ‘Brothers Karamazov’, I see Jesus again walking the Earth. Not in the Seville of the Inquisition evoked by the Russian writer, but in Jerusalem today. Mind you, this isn’t the Second Coming prophesied by the Scriptures. He doesn’t appear in glory escorted by angels with flaming swords. Jesus visits Palestine only for a day. And everybody recognises him as he moves about. “O Son of God! Help us!” Christians cry out. “Prophet Jesus, Son of Mary! Strike down our oppressors!” Muslims invoke. Huge crowds gather around him. Enough to worry the IDF. “Arrest that lunatic impersonator!” an Israeli officer commands. And so the Messiah is seized and shut in an army jail.

Israelis can tell fellow Jews. “You are one of us, stranger. A Hebrew like us,” the burly IDF interrogator puts to the prisoner, “Why are you causing trouble? What do you care about these pesky Arabs?” Like in the story of the Grand Inquisitor, Jesus is silent. What would a verbose exchange between him and the close-minded officer gain? Yet his sacred heart burns with love for both Palestinians and for his own people. That is how it should be. Pity that the Church has, for centuries, ignored the Jewishness of Jesus. Or tried to minimise it. A great mistake. Because he is essentially the Messiah, the Christ of Judaism. Many Jews indeed recognised him as such. Some rejected him but that was part of the divine plan.

So, what does Jesus do? Summon legions of angels from Heaven to teach the IDF a lesson? He could have acted like that in the Garden of Gethsemane long ago but he chose not to. Might he supernaturally cause the Israelis to convert? To become Christians? There are in fact some ‘Jews for Jesus’ around – it is possible. That would be a coercive action. Like it or not, Jews don’t fancy embracing the Cross. The Inquisition tried to force Spanish Jews (and Moors too) into the Church but most of them resisted it. Or practiced a fake Christianity in public while sticking to their ancestral religion in private. Something in the Jewish consciousness shies away from baptism. The sacraments are alien to them. They won’t have them. The reasons are complex, but it is a fact.

Is the Messiah stuck in a dilemma? (Or rather, I am. I mean, in my own tale.) He wants to halt the violence against Palestinians, give them their due, while at the same time as a Jew he cannot harm his own people. He knows how much they too have suffered. Persecutions, pogroms, tortures, Holocaust, Jesus is aware of them all. It grieves him that Jews have turned unjust towards another race, but… what can he do to solve the harrowing quandary?

I am pondering this, feeling I am getting nowhere. Like being shut in the famous locked room when… Eureka! A flash of Zen intuition unlocks the door of the hidden exit. The other day I took part in an online debate on Al-Quds Day in Tanzania. Another participant was a rabbi from Neturei Karta. That’s it! The enlightened Judaism of Neturei Karta does it.

To explain. ‘Neturei Karta’ is a Hebrew expression. It means ‘the Guardians of the City’. A movement within strictly Orthodox Judaism. Outwardly they look like fellow Haredi Jews. Kaftans or black suits, white shirts, fedora hats, ringlets, and long beards. Fiercely anti-Zionist, Neturei Karta Jews can be seen demonstrating alongside Palestinians and calling for an end to the state of Israel, though peacefully. On Torah and rabbinical grounds they consider the Zionist state as a rebellion against God because it was established by force. Jews will go to the Holy Land when the nations and the natives will freely ask them too. Of course, they still await the arrival of their Messiah. Messianic Jews, I suppose.

At his story’s end, Dostoevsky has the Grand Inquisitor refrain from burning Jesus as a threat to the Church. Instead he releases him into the city’s alleys. The Messiah vanishes, silent and ineffectual. The priest is more optimistic. I am having Jesus the Jew dynamically direct the Israeli’s soldiers to remain Jews but embrace a better, spiritual and liberating form of Judaism. That of Neturei Karta. The weapons fall off their hands, they acknowledge the rights of Palestinians and accept they will stay in the Holy Land, not as rulers but as guests. Doesn’t that grab you?

That immensely idiotic gang, the so-called Christian Zionists, will hate this upshot. Many Muslims also will treat it with contempt. A mere idle fantasy, they’ll react. The way ahead is through armed jihad leading to victory, what else? Pretty fantastic too, given the existing power relations in the world. Actually, I feel my vision is more inspiring, more true. The wisdom of my Jesus, the Jewish Messiah, trumps the wisdom/violence of the wise. God willing, Jesus will fix it!