Home / WORLD / If Black Lives Matter wins Nobel, it should be renamed to ‘Mostly Peaceful’ Prize

If Black Lives Matter wins Nobel, it should be renamed to ‘Mostly Peaceful’ Prize 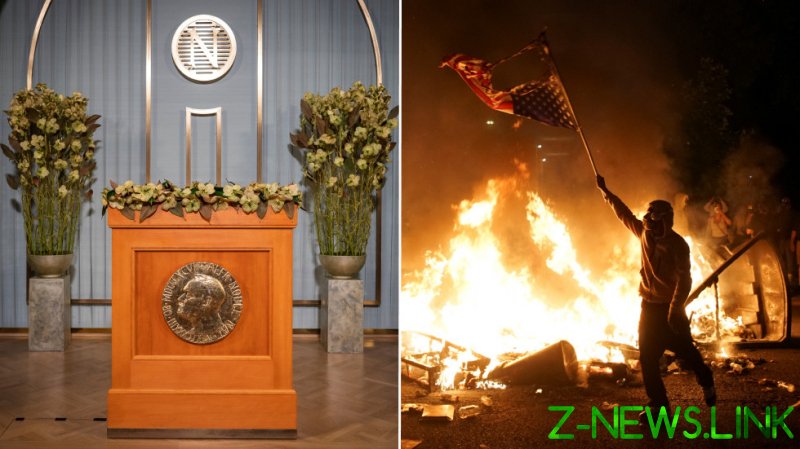 The Nobel Peace Prize has often generated controversy over many of its dubious nominees and recipients. Secretary of State Henry Kissinger shared the prize with his counterpart, Le Duc Tho, “for jointly having negotiated a cease fire in Vietnam in 1973.” Kissinger won despite his role in the bombings in Cambodia and in the killings in ‘Operation Candor’. President Barack Obama was awarded the Nobel Peace Prize in 2009, inspiring him to bomb seven countries as he managed to out-Bush G.W. Bush. The former Nobel secretary told the AP news agency in 2015 that in awarding the prize to Obama, “the committee didn’t achieve what it had hoped for.” You don’t say?

Yet, one of the biggest jaw-droppers may be a current contender, the corporate-funded Marxist front group, Black Lives Matter. The nomination must make BLM’s sponsors proud. And how much do corporate socialists like Black Lives Matter? As of June 2020, corporate America had pledged BLM over $1.678 billion, led by Bank of America and cheap-labor lover Nike.

BLM was nominated for the Nobel Peace Prize by a Norwegian lawmaker. NBC News reported: “In his nomination letter, Petter Eide, a Socialist Left member of the Storting, Norway’s parliament, wrote that he had nominated Black Lives Matter ‘for their struggle against racism and racially motivated violence.’”

By now, much has been said about BLM’s violent roots. I discovered attempts by BLM (and its enablers) to disguise its history and ideology. But BLM’s scrubbing of its shady past has been to no avail, since its goals and tactics were on full display in the BLM-inspired riots. Protests and riots, including looting and arson, rampaged through the US from May to December 2020. The violence that resulted in the aftermath of the killing of George Floyd in Minneapolis was the first “multi-state catastrophe event” ever declared for civil disorder by claim-tracking company Property Claim Services, Triple-I has said.

BLM demonstrations have included calling for the murder of police officers: “What do we want? Dead cops. When do we want it? Now!” On August 29, 2015, during a Black Lives Matter march outside the Minnesota State Fair in St. Paul, a chant rang out: “Pigs in a blanket, fry ‘em like bacon.” Inspired by BLM, at least two police officers were murdered, one at point-blank range.

On September 16, 2020, Axios headlined: “$1 billion-plus riot damage is most expensive in insurance history.” But noted in the report was the obligatory leftist cover for those who looted and set many cities ablaze. “The protests that took place in 140 U.S. cities this spring were mostly peaceful, but the arson, vandalism and looting that did occur will result in at least $1 billion to $2 billion of paid insurance claims.”

In late August 2020, CNN infamously pushed the “mostly peaceful” mantra while a reporter was standing in front of a burning building in Kenosha, Wisconsin. CNN’s font actually read, “Fiery But Mostly Peaceful Protests After Police Shooting.” In May 2020, MSNBC’s correspondent stood in front of a building on fire in Minneapolis, during a BLM riot. Ali Velshi said, “I want to be clear on how I characterize this. This is a, mostly a protest. It is not, it is not generally speaking, unruly. But fires have been started.”

Dedication to the elimination of the family unit, chants to murder cops, the death of at least 19 people, and one to two billion dollars in property destruction – all this seems to have escaped the notice of the Norwegian lawmaker. Or maybe it hasn’t. Perhaps this is the all-encompassing goal of “social justice” – to destroy the fabric of the social body in order to “build back better.”

And so, should Black Lives Matter win this coveted award, their honor should henceforth be known as the Nobel ‘Mostly Peaceful’ Prize.