Home / WORLD / If Biden decides to give increased diplomatic recognition to Taiwan, he risks lighting the touchpaper to war with China

If Biden decides to give increased diplomatic recognition to Taiwan, he risks lighting the touchpaper to war with China 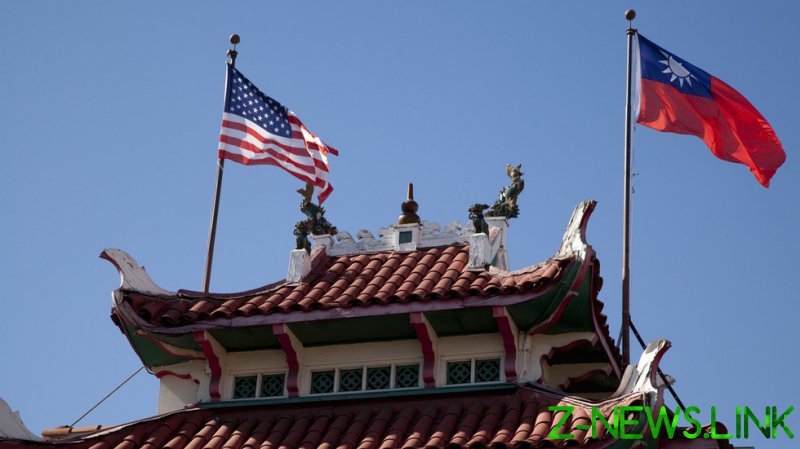 Last week Biden called Xi Jinping. My analysis of that event was that it was a political blow to Biden, as he had been pushed into it by Beijing demanding respect and leveraging contact. The political fallout of having that conversation has since been obvious domestically in America.

Just the following day a series of hawkish proposals got leaked to the Financial Times, claiming that the Foreign Minister of Taiwan Joseph Wu was in America for ‘secret’ talks over the potential renaming of Taipei’s representative office in the United States (its de facto embassy) to include the name ‘Taiwan’ – a move which the Baltic state of Lithuania pursued earlier this year, drawing the ire of Beijing. The Financial Times article claims that Washington, DC is contemplating a similar move, but the catch is that it would have to be done via an executive order. It’s the president’s choice.

For the US to do this would be regarded as a huge provocation by China, and it carries some degree of military risk. The Global Times responded by threatening an economic blockade of Taiwan and the downgrading of relations with the US.

Also on the same day, another proposal was leaked, stating that the administration was seeking to escalate its trade war and tariffs against China. It is likely just noise, but the pattern and timing of these emergence is obvious. These hawkish proposals suddenly hit the press for several reasons: firstly as a face-saving means for the administration so as to not to be seen as ‘soft’ on China; secondly, they were likely leaked by hawkish members of the administration who want to undermine engagement between Washington and Beijing, and hope the radical proposals ‘set the agenda’ and provoke China. Kurt Campbell, Biden’s ‘Asia Tsar’, is undoubtedly one of the suspects here.

It is a typical MO in Washington insider games: to float their agendas in the media and hope to capture the public mood. Such tactics were frequently deployed during the Trump administration, where, despite the White House taking a hard line with China, individuals such as Mike Pompeo, Peter Navarro and Matthew Pottinger all occasionally pushed far more radical proposals via the media. Pompeo, for one, even wanted to ban all Chinese apps.

Thus while these Biden administration proposals may not actually happen, they all go towards illustrating the political constraints and realities the president faces. He has effectively been boxed into a confrontational policy towards Beijing, even if he doesn’t want it personally. This makes de-escalation of tensions very difficult.

How did that come about? When the Trump administration was set to leave office, it set a number of booby traps which have politically checked Biden into following their status quo. These included an enormous escalation of the number of blacklisted Chinese companies pertaining to technology; the infamous declaration of genocide in Xinjiang by Mike Pompeo (which lawyers confirmed was legally flawed and substantive, but who were ignored); and the removal of diplomatic constraints in official contacts with Taiwan.

The new administration felt that, politically, it had to embrace these changes, and has now incorporated hostility as a means of political theatre against China, concerned that negotiating with China might be a liability with voters. This has led every single communication between Washington and Beijing having to be matched by a show of ‘toughness’ from the US side.

Every political meeting has coincided with sanctions against China being announced both before and after the summits. When China unsurprisingly responded negatively to this and started limiting contact (which ultimately forced the Xi-Biden phone call), new hawkish proposals were instantly leaked to the press, demonstrating the administration’s difficulty in rowing back tensions.

But the question is, will Biden himself jump onto this risky move over Taiwan? Logically, it may be politically advantageous in the long run up to next year’s midterm elections. While the US adopting the ‘Taiwan’ name may be seen as largely symbolic, it would be significant in its consequences. China will believe that if the US does it, other countries in Europe could follow suit.

So if Biden does take this decision, it would undoubtedly risk the highest US-China tensions since the Trump era and push Beijing into a corner where it would have to push back. The Global Times is not always as authoritative a source as it is made out to be, but the threat of an economic blockade of Taiwan is a worrying prospect.

This outcome would not be the sort of ‘strategic stability’ Biden was looking for in his call with Xi. It might be what the hawks want, because Beijing’s inevitable response would make it easier for the US to unite its allies in turning against China. But a dramatic standoff in the Straits off the coast of Taiwan would be dangerous; it would not necessarily lead to a shooting war, but it would greatly heighten tensions and take both countries further down the road of conflict, and up the ante on the new ‘Cold War’.

This all puts Biden in a tricky spot. His administration is attempting to recklessly juggle hawkishness with engagement, and this renewed emphasis on the former has already made the latter unfavourable. This has created a China strategy which is riddled with contradictions, with not only unclear and uncomplimentary goals, but a built-in inability to seek to resolve tensions without creating even more tensions! US interests in pursuing balanced ties with China are being thrown away because everything is reduced to the zero-sum rendering of competition and the depiction of Beijing as an adversary.

Essentially what we’re seeing here is a foreign policy bridled on domestic anti-China theatre, orchestrated by the caricature of Beijing which Trump and his lackeys built and consolidated. This is leading to bad and short-sighted decision-making, thus perpetuating and increasing the confrontation that the Trumpists always wanted, as many of the current administration do too.