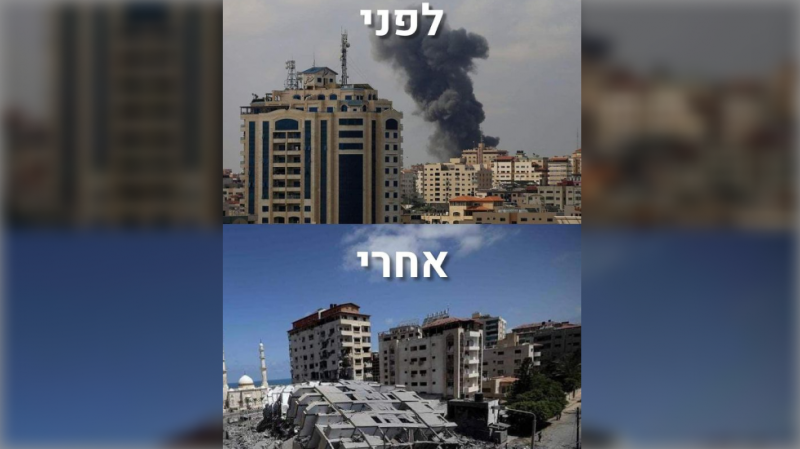 “Another significant achievement,” the Israel Defense Force (IDF) titled its post of Wednesday, showing “before” and “after” photos of the Hanadi high-rise block which once towered above its surroundings in Gaza City. “The tower was used by terrorist organizations,” the IDF wrote, vindicating its attack on the apartment block.

“We will not stop here – we will continue to act in any way necessary to protect the security of the residents of Israel and rule out threats from the Gaza Strip,” the translation reads.

The post has been fiercely condemned by social media users, with many shocked by the audacity of the IDF to turn the bombing of an apartment block into a meme.

One user said that even if the IDF believes those who died were “bad people” it is still people who are dying and yet they have the insolence to make a meme out of it.

“I once hit an animal with my car. Couldn’t sleep for nights. It still haunts me to this day. Its unbelievable that someone can kill kids and celebrate it,” another wrote.

The IDF’s meme comes as the Israel Defense Forces steps up its operations against Palestinian militants. The latest reports suggest that as many as 83 people, including 17 children, have died in Gaza since the weekend when the violence escalated.

Many missiles, fired by Palestinian militant groups including Hamas, have been intercepted by Israel’s Iron Dome defense capability; Jerusalem has reported six deaths.

On Wednesday, Israel’s Minister of Defense Benny Gantz promised to continue taking the fight to Hamas and other Palestinian forces to achieve “complete silence” before any truce is reached.