Home / WORLD / ‘I’d like to thank my BASE’: Trump credits supporters with Youngkin’s projected victory in Virginia, as Pence touts GOP ‘COMEBACK’

‘I’d like to thank my BASE’: Trump credits supporters with Youngkin’s projected victory in Virginia, as Pence touts GOP ‘COMEBACK’ 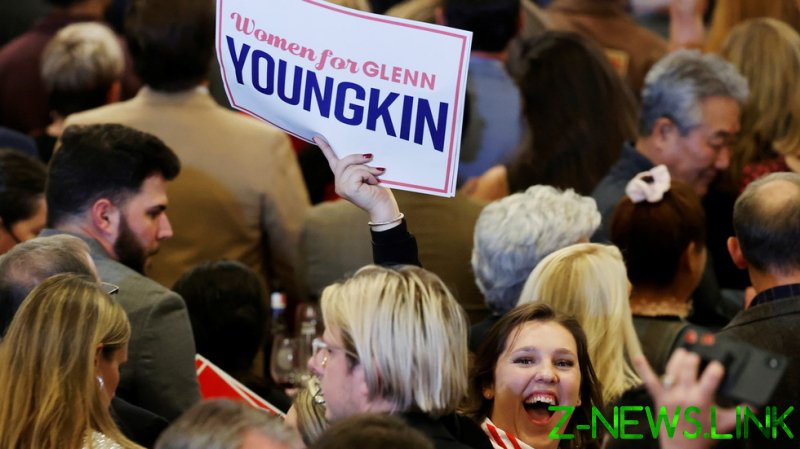 “I would like to thank my BASE for coming out in force and voting for Glenn Youngkin. Without you, he would not have been close to winning,” Trump said in a statement shared by spokeswoman Liz Harrington late on Tuesday night.

Pence also congratulated the GOP candidate, saying he struck a “HUGE victory” and will “serve the people of Old Dominion well with common sense Conservative policies that will benefit parents, families, and hard-working Virginians!”

Though Pence denied that an appearance in Virginia late last month was meant as a campaign stop for Youngkin, he nonetheless urged Virginians to cast their ballots for the Republican ahead of Tuesday’s vote.

While the state still has yet to count some 9% of its ballots, Youngkin stands at just under 52% versus the nearly 48% scored by Democratic challenger Terry McAuliffe, according to a New York Times tally. Decision Desk HQ, a site that tracks and reports US election results, has projected the race in Youngkin’s favor.

Results for Fairfax County, one of the state’s bluest regions, were initially delayed after election officials missed an 8pm reporting deadline, though with 100% of the ballots counted, McAuliffe led the county with 64% of the vote to Youngkin’s 35%, while third-party candidate Princess Blanding took the remaining 1%.

Trump noted the reporting pause in Fairfax in an earlier statement, saying “All eyes are on Fairfax, why the delay?” but also said “early indications are that MAGA voters are turning out big for Glenn Youngkin.”

The former president appeared to take credit for some of Youngkin’s success, boasting in yet another statement that it appeared “Terry McAuliffe’s campaign against a certain person named ‘Trump’ has very much helped Glenn Youngkin.”

“All McAuliffe did was talk Trump, Trump, Trump and he lost! What does that tell you, Fake News?” Trump asked rhetorically. “I guess people running for office as Democrats won’t be doing that too much longer. I didn’t even have to go rally for Youngkin, because McAuliffe did it for me.”

The race in Virginia has been seen by some as a referendum on Democratic governance since the election of President Joe Biden. Though the state is typically a shoe-in for blue candidates, polling ahead of the race showed that Youngkin stood some chance to win, with some media pundits even forecasting an upset victory for the Republican. Though the state has yet to report 100% of its results, it appears those predictions may have been borne out on Tuesday night.