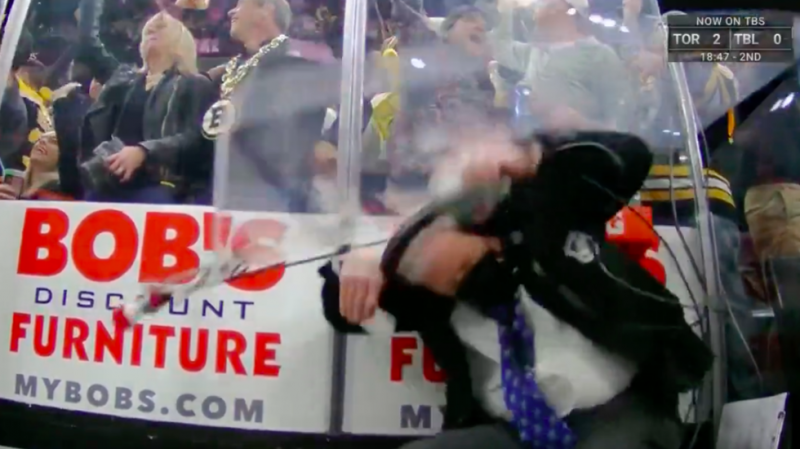 Ice hockey fans are accustomed to the occasional injuries which are part and parcel of a such a full-contact sport – but the one which took place at Friday’s Game 3 playoff between the Boston Bruins and Carolina Hurricanes was perhaps the most unusual seen in recent NHL history.

After the Bruins took a 3-1 lead their delirious fans celebrated in the time-honored NHL tradition of banging the plexiglass which surrounds the ice.

Unfortunately, this time around their raucous celebrations prompted a section of the heavy break-proof glass to come loose from the perimeter of the rink and fall on Boston’s timeout coordinator Joe Foley.

Footage which captured the incident appeared to show the extent of the injuries suffered by Foley, with reports indicating that he was hospitalized as a result of the accident after medics from both teams rushed to give him medical attention.

Foley was said to be conscious when he was removed from the arena.

“Our thoughts are with the NHL off-ice official who was injured,” the Bruins wrote on their Twitter account. “We are sending him our best wishes.”

Boston’s right-winger David Pastrnak later confirmed that he had received word that Foley’s injuries were not serious.

“We heard he’s doing all right and he’s going to be fine,” the Czech star said.

Boston won the game by a score of 4-2 to take their first victory of the series, cutting Carolina’s lead to 2-1.