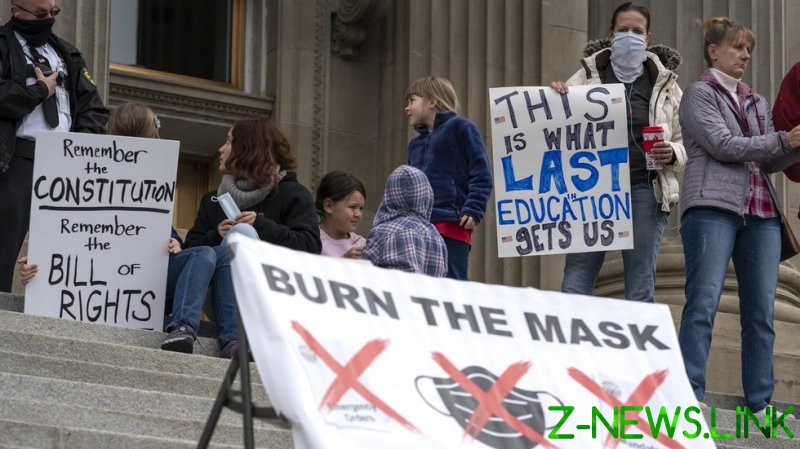 Video footage on social media shows demonstrators dropping masks into a burn barrel on Saturday as people cheered and a man in the background said, “Smell the freedom, baby.”

Journalist Heath Druzin said Idaho Lt. Governor Janice McGeachin and at least three state legislators attended the protest. He posted photos of a crowd of maskless demonstrators listening to a speech and people talking and hugging on a stairway. One woman at the event carried a sign saying, “I will not self-suffocate,” while another sign said, “No masks, no mandates. Free your face and your mind.”

While there is no statewide mask mandate in Idaho, seven counties and 11 cities, including Boise, require wearing masks in public in a bid to slow the spread of Covid-19. A bill seeking to ban mask mandates was introduced in the Idaho state legislature this week, with its sponsors arguing that forcing “healthy individuals” to wear face covering caused “physical and emotional and even mental injuries to our bodies.”

Health Freedom Idaho, an activist group involved in the event, posted a sign underlined by its motto: “Your life, your health, your way.” Some participants signed a large “burn the mask” sign and wrote messages, including one who said, “My body, my choice.”

One of the organizers led the crowd in reciting the “Pledge of Allegiance.” At one point, state troopers told protestors to put out the barrel fire, which they did. As police and troopers continued to ask questions of an organizer, other protestors told them to “leave her alone” and to “get out of here.”

The crowd was estimated at 100-200 people, and Darr Moon, one of the coordinators, claimed that “burn the mask” rallies were being held at about 30 other locations in Idaho on Saturday.

“It’s a widespread grass-roots movement, an uprising, in that regard,” Moon said. He added, “We’re standing here today to rein back government, to re-establish our Republican form of government, a government that has balance between the branches.”

Social media users mocked the rally. Alex Gutierrez, associate director of career development at Boise State University, quipped, “Was this before or after the book burning?” Others denounced the stunt as an example of terrible parenting.

The event capped a week in which governors in Texas and Mississippi ended mask mandates in their states. Alabama Governor Kay Ivey said her state’s mask order would end on April 9.