‘I will destroy you’: Deputy White House spokesman SUSPENDED over threatening reporter 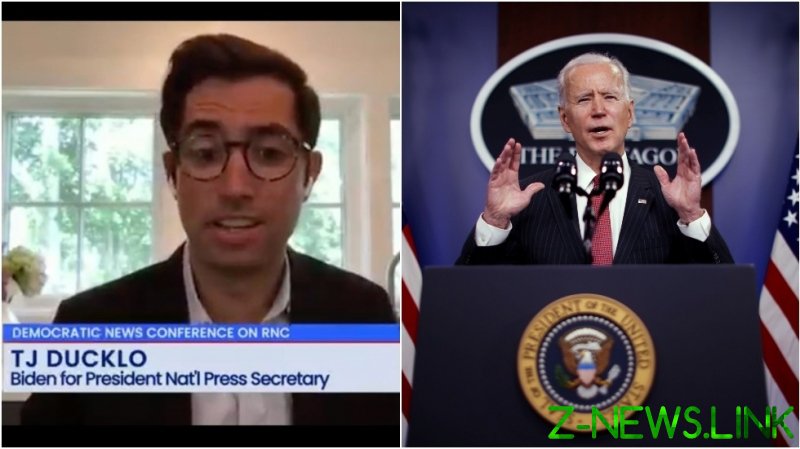 Ducklo’s suspension was announced on Friday by White House press secretary Jen Psaki, who said he apologized and sent a personal note expressing “profound regret” over the “heated conversation” about his personal life.

He has been suspended without pay for a week and will “no longer be assigned to work with any reporters at Politico” once he returns, Psaki added.

Earlier in the day, Vanity Fair reported that Ducklo had made “derogatory and misogynistic” comments to Politico’s Tara Palmeri, apparently trying to quash a story about his romantic involvement with Axios reporter Alexi McCammond.

Palmeri had called McCammond, and a male colleague of hers had left a message to Ducklo, on Inauguration Day. Ducklo then called Palmeri and threatened to ruin her reputation if she published the story.

“I will destroy you,” he said, according to Vanity Fair’s sources. He also reportedly accused Palmeri of reporting on the relationship because she was “jealous” of McCammond.

Politico’s editors called the White House the following day and Ducklo’s conduct was discussed by Psaki, White House Communications Director Kate Bedingfield, and senior adviser Anita Dunn, among others – but no action was taken until after Vanity Fair published the story.

McCammond and Ducklo had been friends for a while but became openly romantically involved after the 2020 election, at least according to a friendly profile in People published on Monday. Politico finally reported on their relationship the day after.

McCammond had previously covered the Biden campaign. After she disclosed the relationship to her editors in November, she was reassigned to cover Vice President Kamala Harris and “progressives” across the US.

Ducklo’s suspension was met with mixed reactions. While some people were sympathetic to someone with lung cancer who had after all apologized, others quoted Biden’s own words upon taking office, that he would fire anyone who disrespected colleagues or talked down to someone, “no ifs, ands or buts.”

“Serious question on our minds this morning: Does this standard apply to how mid-level press aides treat reporters?” was how the Politico Playbook, for which Palmeri writes, commented on Biden’s announcement on January 21 – in reference to Ducklo and his hostile call, as it now appears.

Palmeri has also attracted the White House’s ire for accusing Psaki of demanding questions from reporters in advance, so as to avoid the “circling back” she has become notorious for. However, she is not the only one to make such a claim – the Daily Beast has done the same, for example.

Hours before the Ducklo scandal broke, Psaki had retweeted First Lady Jill Biden and said, “Compassion and kindness is back.”