Home / WORLD / ‘I was surprised’: Mayweather hails Paul as YouTuber goes distance in boxing bout before claiming he could win rematch (VIDEO)

‘I was surprised’: Mayweather hails Paul as YouTuber goes distance in boxing bout before claiming he could win rematch (VIDEO) 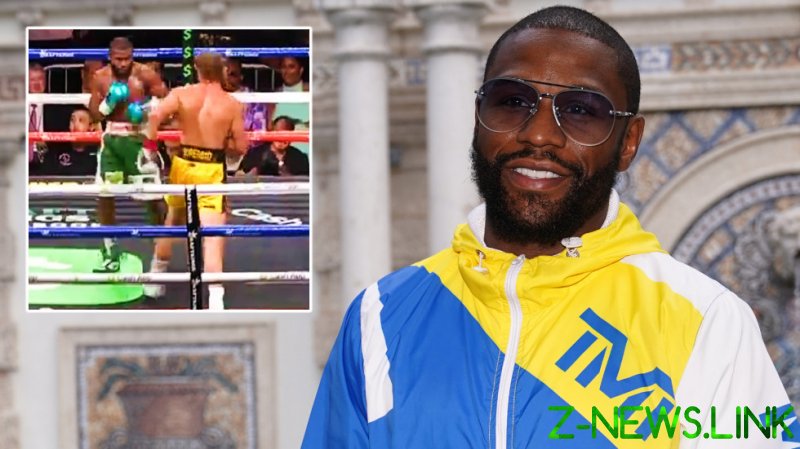 Evoking ex-UFC champion Conor McGregor’s attempt to rattle Mayweather early on when they fought in 2017, Paul came out swinging with a first-round performance that some felt had seen the rookie boxer exhaust his energy supplies early.

After an uneventful second round, Mayweather took the front foot in round three, looking capable of picking off a braggart 18 years younger than him after absorbing no discernable punishment at the start of the eight-round exhibiton.

By round four, Mayweather was clearly picking his shots and unloading at will, leaving the game Paul in a predicament familiar to many of the fighters his opponent had beaten during his 50-fight unbeaten career prior to their encounter.

Little could be drawn from the second half of the contest, with Mayweather evidently lacking the finishing desire that he is known for while a tiring Paul attempted to assert his physicality on his celebrated foe.

“I had fun,” Mayweather said afterwards, looking unblemished by a lucrative battle that many had felt was unbecoming of him.

“I’m not 21 any emore. It’s good to move around with these young guys. He was strong, tough – better than I thought he was. I was surprised by him tonight.”

Paul appeared to concede that he has adopted a sometimes-prickly online persona and played a provocative part in the build-up to the unlikely showdown.

“I hate being a d*ckhead,” he said. “It was one of the greatest moments of my life.

“This is the coolest thing ever. I’m glad I made it out. He’s tough to hit. He’s not even that old.

“I don’t want anyone to tell me anything is impossible ever again. The fact that I’m in here with one of the greatest boxers of all time proves that anything can be done. It was an honor.”

Asked about Paul’s future in a sport he is almost entirely new to, Mayweather said he saw the celebrity’s path as “hard” while calling him a “tough, rough competitor”.

“He knew how to use his weight and tie me up,” he claimed. “I want to thank all the fans who came out. You are unbelievable. Tonight was a fun night.

“We don’t know what the future holds but I’ll talk with my team about [it]. You’ve got to understand, I’ve been in this sport for 25 years.”

Paul admitted that he did not know whether Mayweather could have knocked him out had he been at his formidable best. “You never know with this guy,” he said.

“I’m going to go home thinking, ‘did Floyd let me survive?’ Let me get a little better – maybe I can end it next time.”