Home / WORLD / ‘I was so worried’: F1 king Hamilton praises ‘courageous’ mechanic after plowing into him with car in pit at Russian GP (VIDEO)

‘I was so worried’: F1 king Hamilton praises ‘courageous’ mechanic after plowing into him with car in pit at Russian GP (VIDEO) 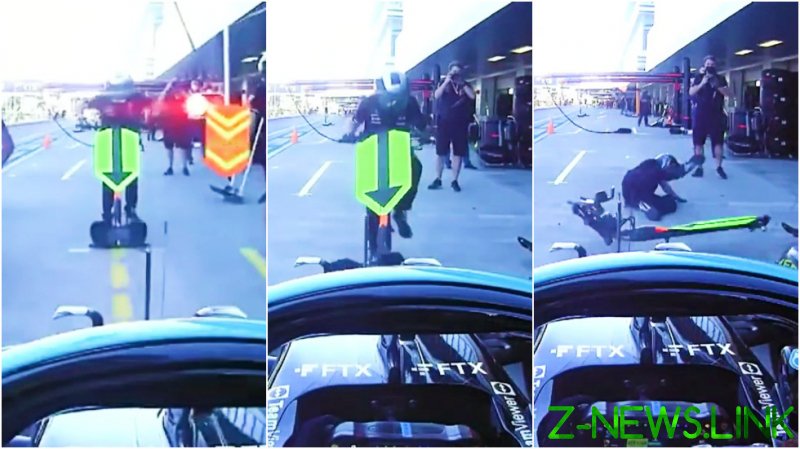 The unwitting team member suffered the unenviable agony of being thrown backwards into the air by the front of Hamilton’s car, shunting him up and back onto the ground as the Brit cruised in to the pit.

Bravely picking himself off the floor, the unnamed man signaled that he had not suffered significant injuries while Hamilton asked: “Man, magic – is he OK?”

A member of the team reported back: “Yeah, he’s alright. Been given a thumbs up.”

As footage of the scary incident inevitably spread on social media, the official account of Hamilton’s Mercedes team responded: “Bump. The good news is that he’s OK.”

Hamilton was backed by stars including tennis great Venus Williams as he reacted on his own platform.

“I believe this is the first time I’ve taken out a mechanic in 14 years,” the revered veteran told his fans.

“My heart was in my mouth – I was so worried. Thankfully he was OK; pretty courageous to stand in front of the car like that.

“We all make mistakes, it’s part of the journey. But it’s how we come back from them that matters most.”

Other than fearing he had badly hurt a mechanic, the seven-time champion had a successful day in Sochi – not least because arch-rival Max Verstappen will start at the back of the grid on race day.

Verstappen was already facing a three-place grid penalty because of his crash with Hamilton in Monza last time out, and the Red Bull contender has been handed a further punishment after taking a new power unit before the Russian race.

The man who will start the Grand Prix five points behind Verstappen at the top of the standings went second-fastest overall during practice.

Mercedes have been utterly dominant in Sochi in recent years, and their formidable run looks set to continue after teammate Valtteri Bottas was the only driver to go faster than Hamilton.