Home / WORLD / ‘I was almost paralyzed’: Palestinian pensioner invokes George Floyd as he recalls Israeli soldier KNEELING on his own neck

‘I was almost paralyzed’: Palestinian pensioner invokes George Floyd as he recalls Israeli soldier KNEELING on his own neck 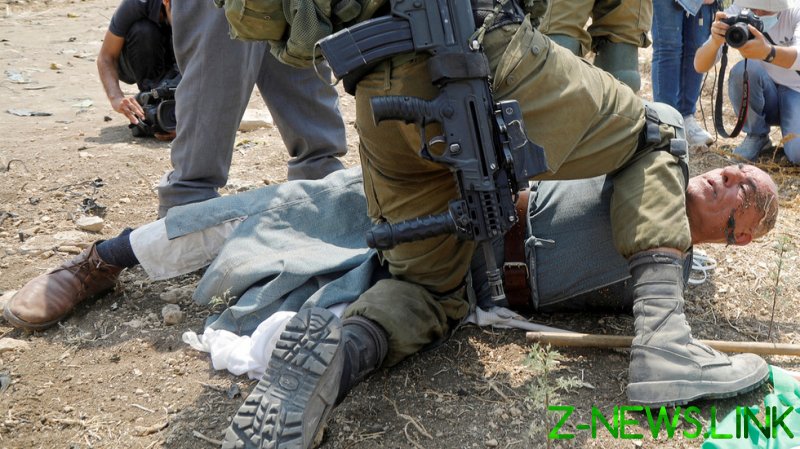 Khairy Hanoun, a 65-year-old resident of Tulkarm, a Palestinian town of roughly 62,000 people, went out to support a Palestinian demonstration in the Israeli-occupied West Bank territory several days ago. Unarmed and wearing traditional Arabic fatigues, he showed up at the rally holding a Palestinian flag.

Once there, he spotted children watching the protest, overseen by a group of armed Israeli troops. As the minors were behaving peacefully, Hanoun tried to persuade the soldiers to leave. “I tried to intervene to keep harm away from the children. I spoke with the officer, telling him, ‘These are children – you cannot point your weapon at them,’” he told Ruptly on Friday.

Pushed aside by a soldier, the elderly man tried to grab the strap of his weapon, in order, he said, “to change the direction of the target.” What happened afterward was captured on film by the numerous international reporters present, and became hotly debated news in the Middle East and beyond.

The Israeli soldier wrestled Hanoun to the ground and, after a short scuffle, knelt on his neck and back. His comrades, meanwhile, wielded their guns, arguably to make sure no one stepped in to help Hanoun.

“What surprised me was that he put his foot on my neck,” Hanoun recalled, adding that he hadn’t been resisting and didn’t have any weapons on him. He said he was “almost paralyzed” in the incident, which drew comparisons with the notorious arrest of the African American George Floyd, whose death in similar detention sparked massive rallies in the US and elsewhere against police brutality and racism.

What came to my mind during that moment was the American policeman who killed the black citizen in the United States.

Hanoun, whose luck was better than Floyd’s, said the brutal technique, which has been used against other Palestinian protesters, is reckless in the extreme. “If you step on his neck, you are trying to kill him,” the pensioner stated baldly.

The protest on this occasion was against the Israelis’ plans to confiscate Palestinian lands in order to build an industrial park outside Tulkarm. Notably, the move happened just weeks after the United Arab Emirates struck a historic agreement with Israel on “normalizing” ties and establishing formal relations.

To Hanoun, however, making deals with the Jewish state is a heinous deed. “Shame on you, that you see this crime and still [give them] your blessing … the Israeli army kills with your weapons and your money,” he concluded, directing his scorn at Israel’s wealthy new funders.