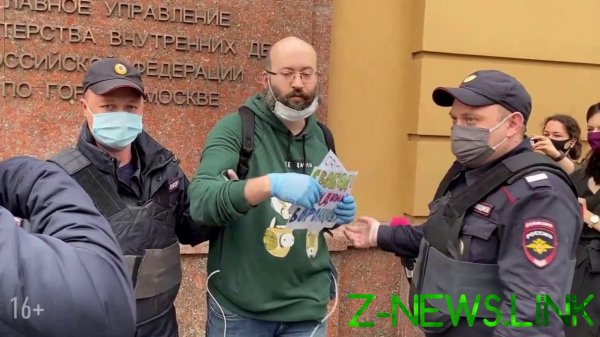 Journalist Ilya Azar has launched a project in support of pickets

Journalist Ilya Azar has announced its new project — “Pikemen”, which he launched “in support of freedom of Assembly in General, and the pickets in particular.” About this he wrote on his page in Facebook.

“On the site Picketman.ru (I made it myself, as best I can) I will tell the news on the picket lines, detentions, arrests and fines, to do an interview with the main characters, as well as to raise funds to pay illegal fines,” wrote Azar.

“I want to help pay the fines of all those who were arrested at solitary pickets. And these people this summer in Russia, not dozens, and, I think, more than a hundred people,” adds Azar.

We will remind that the Tver court of Moscow on may 28, Azar was arrested for 15 days for participation in the picket in support of the founder of the project “police Ombudsman” Vladimir Vorontsov. The court found the hazard guilty under part 8 of article 20.2 of the administrative code (“the Repeated violation of the laws on rallies”). In support of the hazard to the rally to GU Ministry of internal Affairs of Moscow has published his colleagues and activists.

For a picket in support of the hazard, in particular, was fined the journalist of “Rain” Mikhail Fishman (10 thousand rubles), journalists “echo of Moscow” Tatiana Felgengauer (18 thousand roubles) and Alexander Plyuschev (10 thousand rubles), editor-in-chief of “media zones” Sergei Smirnov and others. All of them were convicted of violation of the order of picketing (part 5 of article 20.2 of the administrative code). In addition, the decision of the court for a picket in support of the journalist on 300 thousand roubles were fined the defendant in the “Moscow business” Samariddin Radjabov.