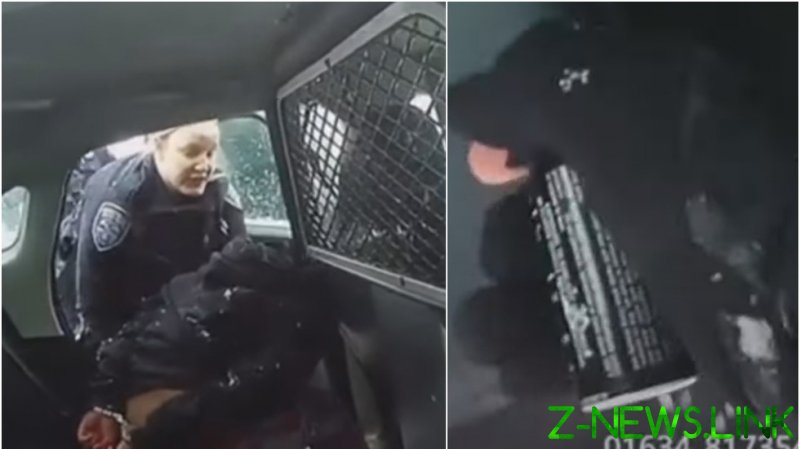 A minute-long bodycam video shows a girl in handcuffs sitting in the back of a police car. She is distressed and does not appear to be following the officers’ commands. The clip was edited to blur the girl’s face.

“Come on. I’m gonna pepper spray you, and I don’t want to, so sit back. Come on, this is your last chance, otherwise pepper spray is going in your eyeballs. Come on, let’s go,” an officer says.

“I want my dad,” the sobbing girl pleads, to which a female officer replies: “I’m gonna go get him.” She adds: “I will fix it,” apparently referring to the cuffs.

Another officer joins in, asking the girl to “just stop for a second and take a deep breath.”

She is then heard screaming: “Please no! Stop!” The officer soon takes out a spray can and points it at the girl’s face.

“It went into my eye! Please!” the girl yells, as the officer is heard telling his colleague: “I got her, I got her.” He then closes the car door from the outside, steps away from the vehicle and lets out a sigh. He calmly adds: “Unbelievable.”

According to the local newspaper Democrat and Chronicle, police were called in for “family trouble” involving a potentially stolen vehicle. They were then approached by the custodial parents of the girl, who said she feared that the minor would hurt herself and others. The girl was said to have run away from home before being apprehended on a nearby street.

Police said the minor became “agitated” and began to pull away and kick the officers when she saw her custodial parent. The girl was then handcuffed for her own “safety,” and at the request of the parent. The child remained non-compliant, refusing to put her feet in the car, which “required an officer to use an irritant on the minor,” police said.

The girl was then taken to a hospital and later released to her family.

Rochester Police Captain Mark Mura said that the incident is currently under review. He explained that the initial call was about a woman having a dispute with her boyfriend who took her vehicle from the home.

At the same time, Rochester Interim Police Chief Cynthia Herriott-Sullivan said, “I’m not going to stand here and tell you that for a 9-year-old to have to be pepper-sprayed is OK.”

Mayor Lovely Warren earlier said she was “deeply troubled” by the incident, and has directed the police to carry out a “thorough investigation.”

“This is not something that any of us should want to justify, can justify,” Warren said. “And it is something we have to change.”

Several city councilmembers said they were equally shocked and angered by the way police treated the minor.

“NINE?! How afraid of a handcuffed 9 year old girl were they that they needed to pepper spray her?” councilmember Mary Lupien tweeted. “Having been pepper sprayed I can attest that this incident will change her life. There will be accountability for this.”

Demond Meeks, a member of the New York State Assembly, tweeted that the officers should be fired for their conduct.