Home / WORLD / ‘I want justice’: Brother of tragic Afghan footballer who fell from plane in desperate escape bid wants answers from US government

‘I want justice’: Brother of tragic Afghan footballer who fell from plane in desperate escape bid wants answers from US government 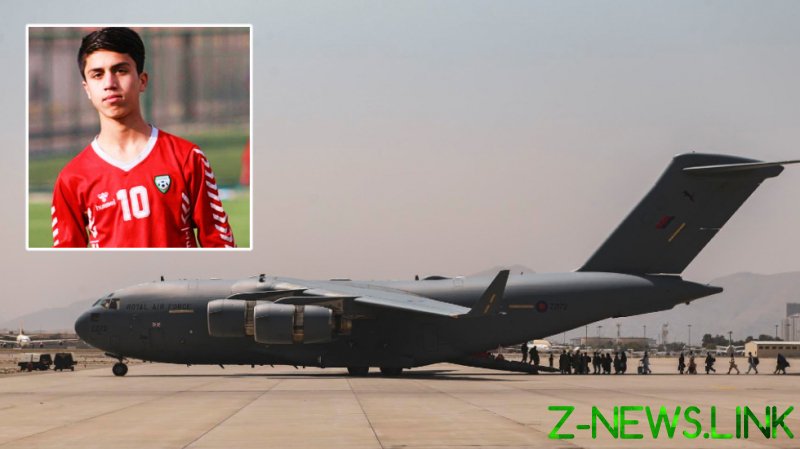 Youth international Zaki Anwari was crushed in the wheels of a USAF Boeing C-17 when he tried to hold on to one of the last flights leaving his country after the Taliban regained power, with his remains later said to have been found in a wheel well.

The 17-year-old’s brother, Haji Ahmed Zakaria, has revealed that Anwari’s family were debating whether to send one of their younger brothers, Nazir Khan, to attempt evacuation while the absent footballer took it upon himself to head to the Karzai International Airport, where the departing US forces had been flying people out.

“His mother called him, demanding him to return home immediately,” Zakaria told Ren TV, explaining that Anwari felt he was taking one of the only chances left to escape. “After that, he hung up.”

While the city descended into a state Zakaria described as chaos, the family received another call from Anwari’s phone 15 minutes later, picking up to hear a stranger telling them the young man was dead.

“We went to the airport, gathered friends – the whole family searched for Zaki’s body until the evening,” said Zakaria of the fruitless bid to find his dead brother.

“We asked, begged, even hid in ambulances and asked [the Americans] to take us [to his remains], but even doctors were not allowed there. We found Zaki’s body two days later.”

Zakaria accused US personnel at the airport of producing scenes that were even more traumatic than those taking place across the rest of the city.

“They crushed him like a bug. They treated the rest like animals,” he claimed. “They shot at the crowd. Why? They didn’t even want to drive anyone away, they were just having fun.

“We want Washington to conduct an investigation so that those soldiers who, as they said in our news, showed negligence, are brought to justice.

“How could they allow the death of people so that they fell from the plane? They fell off the chassis. I cannot forgive this from the Americans. I want justice. Nobody should lose relatives as we lost Zaki.”

Anwari was a high school graduate whose dream was to play for his senior national side and compete against players from other countires.

The family had planned to leave Afghanistan in order to help him chase that ambition, and they have now moved home in an attempt to ease their grief.

“In the new house there is not a single thing connected with him,” Zakaria said of his family’s approach. “Because when they see something that belongs to him, they start crying.”