Home / WORLD / I think my fit-to-fly Covid-19 test was thrown in the bin. How can I trust anything I’m told about the pandemic?

I think my fit-to-fly Covid-19 test was thrown in the bin. How can I trust anything I’m told about the pandemic? 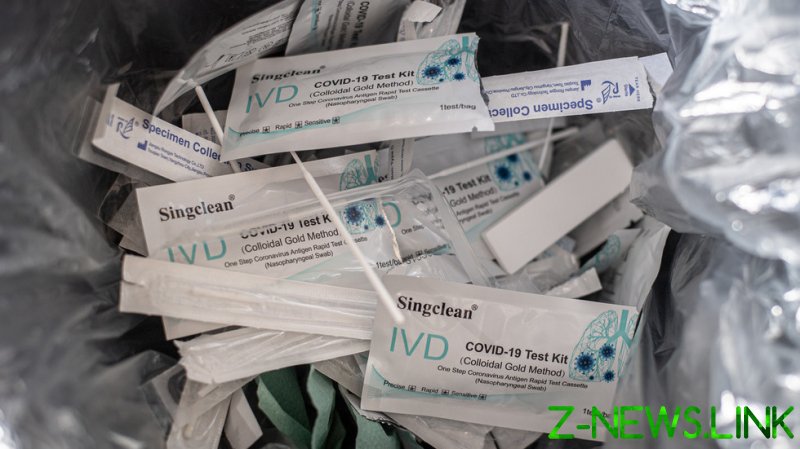 According to the Sun, RT Diagnostics, a company based in Halifax, West Yorkshire, has been charging thousands of unsuspecting customers £79 ($107) for fit-to-fly and day two and day eight quarantine test certificates, then dumping the returned Covid-19 tests in the bin.

Ordinarily, I’d be shocked but not surprised that yet again an absence of government oversight could be compromising public safety. But what really makes my skin crawl, quite literally, is I used RT Diagnostics to carry out my own PCR tests after returning to the UK from the Caribbean having been lured by its ‘too good to be true’ pricing.

As someone who researches dodgy dealing and skulduggery for a living, I like to think of myself as being pretty hip to a scam when I see one, which is why I started wondering if I’d become a ‘mark’ after my day two test results didn’t arrive until day six, making a mockery of the government’s day five ‘Test-to-Release’ shorter quarantine scheme. My day eight results never showed up at all, but I was eventually issued with a “Negative Test Result Certificate” which may or may not be worth the email it was printed on. Repeated calls to RT Diagnostics were met with a persistently engaged dial tone. Likewise, emails to the company, run by local Labour councillor, Faisal Shoukat were ignored. All deeply unsatisfactory, I’m sure you’ll agree, and I should, in the interests of fairness, point out that RT Diagnostics has denied the Sun’s allegations.

Whatever has – or hasn’t – gone on, it’s clear that this isn’t how a legit, government-endorsed company should go about its business, which begs the question: Has RT Diagnostics simply taken my money, thrown my test vials in the trash and made a sucker out of me as it apparently has countless other customers who’ve received late results or no results at all? If so, it’s yet another illustration of the Tories’ shabby management of the pandemic. Well, shabby for the punters… not so shabby for the privateers making millions out of people’s misery.

Thanks to a total lack of government price controls, companies are charging as much as £575 for on-site testing by a professional, while at the lower end of the price spectrum some are charging as little as £23.99 for a self-swab test, which has given rise to a price war among cheaper service providers. Given the costs of PCR tests for myself and three other family members when we left the UK last November, plus the costs of PCR tests on arrival in the Caribbean, plus the costs of leaving there this summer, and the costs of returning to the UK, RT Diagnostics’ competitive prices, along with its promise to “deliver all orders received before 9am for the following day” and of course that deal-sealing UK government endorsement were undoubtedly attractive.

However, Action Fraud, the UK’s national reporting centre for fraud and cybercrime for people who think they may have been “scammed, defrauded or experienced cyber crime” has received complaints about RT Diagnostics following the company’s shoddy practices, which are now backed up by the Sun’s special investigation.

If, as the Sunclaims, the company has received as many as 10,000 tests – which are a legal requirement to either go abroad or exit the UK’s quarantine procedure – every day, RT Diagnostics will have generated millions in profit. But if it has indeed left a mountain of confidential test vials and customer data “lying around in boxes without being processed” it will have also compromised the integrity of the government’s most critical aspect of Covid-19 monitoring, namely the level or rate of infection of those coming into and leaving the country.

As one “shocked” RT Diagnostics worker told the Sun, “The staff are not testing all the samples but the people are being told their results are negative. This is very serious. Their customers could be spreading the virus around completely unaware.”

While the UK government claims it “does not endorse or recommend any specific test provider” the inclusion of RT Diagnostics on the government’s own website is a de facto endorsement of the company. But such backsliding, double-speak and general arse-covering are what we’ve come to expect from a state that’s happy to generate billions of pounds for a select few while fleecing millions of desperate Brits for fudged PCR test results, half-baked restrictions and ill-conceived lockdowns.

Cambridge Clinical Laboratories’ Tony Cooke, told the Sunthat dozens of “pop-up labs” have appeared thanks to the rise in holiday bookings. Yet of the 400 government-approved providers on the UK.GOV website “only six private labs are fully approved for Covid testing”. Cooke warned, “Anyone could pop up, do tens of thousands of tests and disappear.”

And that, sadly, speaks volumes about the way this whole sorry crisis has been handled.