Home / WORLD / I know this may be controversial, but a Tony Blair & Nigel Farage dream team is what Britain needs to tackle Covid-19

I know this may be controversial, but a Tony Blair & Nigel Farage dream team is what Britain needs to tackle Covid-19 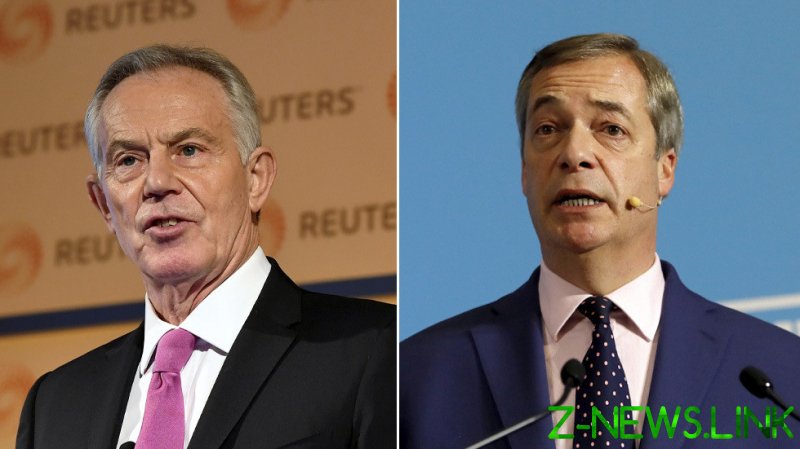 Cometh the hour, cometh the men. Covid-19 has ravaged Britain and turned it into plague island, eliciting a little sympathy and some brickbats from around the world.

It has Europe’s second-worst death toll, now at around 75,500, and while most other nations have ramped up travel regulations to stop the spread, people arriving at London’s Heathrow Airport are still reporting absolutely no checks or tests as they leave the airport ready to contract or spread the virus.

Christmas was on, definitely on, and then ultimately off. Schools were reopening and safe, definitely reopening and safe, and then they weren’t. A new lockdown has been introduced that will be over by mid-February. Well, maybe. The UK has lurched from chaos to confusion, with Scotland’s First Minister Nicola Sturgeon publicly criticising Prime Minister Boris Johnson. The main opposition party, Labour, doesn’t have a coherent plan either.

Some people don’t want a vaccine. Others refuse to wear a mask. And less fortunate souls are dying while their loved ones comfort them during their final moments via Zoom. The country is in a war and under siege from all angles.

And there’s no coherent strategy or joined-up plan to put the UK on a forward footing. We’ve got a bumbling cabal of leaders, with every other Briton a passenger along for the ride and forced to suffer the consequences come hell or high water. Lions led by donkeys? It’s the innocents led by the spineless.

That’s why now is the time to forget all political affiliations and get real. Time to call on two individuals who are leaders and command respect, even if it’s grudgingly, when they speak – Nigel Farage and Tony Blair. Forget the Brexit debate. Forget the rights and wrongs of invading Iraq. It’s not about wiping the slate clean – it’s about getting the job done.

Farage is a world-class communicator. He speaks with a clarity that even his arch-enemies understand. There’s something about him that our other politicians don’t possess: he is prepared to get his hands dirty.

He’s able to gauge public opinion and unite people around a cause or movement. Those are the precise skills that are required as we eyeball the Covid-19 onslaught. He could deliver the UK’s strategy in a way that everyone could understand. He’s a master at placing topics at the centre of the public narrative.

While Mr Brexit should be the captain of the ship, standing tall and proud on the deck, we need an operations man – someone to liaise with business leaders, heads of departments, power brokers and other heads of state.

We need a person who knows what to say and when and how to say it. Someone who understands that real life is not linear, that gathering scientists in a room and letting them argue over what to do isn’t going to turn the tide on an issue this big. That there’s an element that needs to be done out of sight, in a backroom. That individual is Tony Blair. Love him or hate him and his smarmy smile, he was Britain’s last great statesman.

You might think they’re unlikely bedfellows, but Farage even released a video recently in which he admitted his respect for Blair’s capabilities and smart thinking. “I do not agree with Tony Blair on much, but he has led the debate on vaccinations well. Put him in charge of the vaccine programme and let’s have a government of all the talents to end this unmitigated disaster.”

He created a political vision, New Labour, that seduced rock stars, taxi drivers and everyone in between and won three elections in a row. He’s the only one in our armoury who can call the American elite and have his voice listened to. He’ll have any number of oil-rich Middle Eastern leaders in his phonebook. He knows what it’s like to work in the shadows and carve out a plan of action – maybe not a utopian solution, but one that works in reality.

We all wish everything should run as predicted, that people would abide by social distancing and follow the rules. Logic dictates it shouldn’t have turned out like this. Sadly, real life is not a game of chess, and the government’s current plan has it locked in stalemate with Covid-19.

Blair could tighten that massively. He would never look like the junior partner in a room with a global chief executive or a powerful activist, whereas Boris Johnson gives the impression he enjoys the novelty of these occasions like a 10-year-old on a trip to Disneyland.

After all, even though it was derided by some, it was Blair’s idea to offer one injection to a far greater number of people than give two to a much smaller number initially. Everyone will get two in time, but his plan meant the net of immunity could be stretched to slow down the runaway train of transmission.

He was also the first major voice to highlight the fact that students are a low-risk group in terms of fatalities but move around a lot and are therefore ‘super-spreaders’. He’s a smart thinker with clever ideas.

The bell is tolling. Boris needs to swallow its pride and ask these two men to take on the task of leading us back to normality. Yes, yes, under your wise overall leadership, Boris, of course (and you’ll get the plaudits for your bipartisan genius – no need to mention my advice on this).

A week ago, many people were upbeat that 2021 could not possibly be worse than its predecessor. Well, with the new strain, and cases spiralling beyond comprehension, it looks like it will be. So, ignore your politics and ask yourself this: if it were your children’s lives on the line and you needed some action taken to save them, would you choose BoJo and Gove, or Farage and Blair?