‘I hope they’ll forgive me’: Khabib apologizes for heavily-criticized comments on Afghanistan (VIDEO) 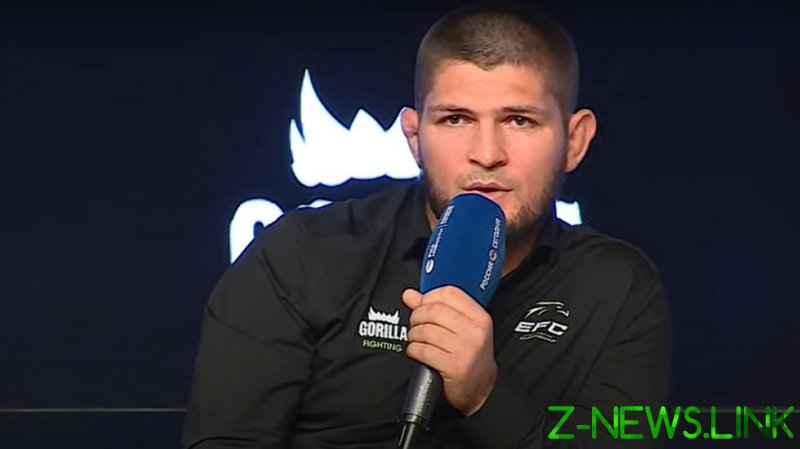 The former UFC lightweight champion, who is one of the most prominent Muslim athletes in the world, refused to be drawn into a discussion on the recent Taliban-led takeover of Afghanistan at a recent press event to promote a bumper deal he and his team signed with a sports energy drink.

Khabib’s reluctance to comment was seized upon by many of his supporters, especially due to the fact that he has rarely been shy in the past to speak on issues affecting Muslim people – especially following his outspoken comments last year related to French President Emmanuel Macron, whom the former UFC star said had “offend[ed] the feelings of more than 1.5 billion Muslim believers” following comments he made about a spate of stabbings in France last year.

But noting the backlash, Khabib revised his comments at another press event in Moscow on Monday.

“My reaction was because I didn’t want to comment on politics,” he said.

“Of course the reaction I received was stormy from my Afghan fans. I looked again at my answer… when I said it was thousands of kilometers away and didn’t concern me or the person who asked me.

“I have a very close relationship with the Afghan people. From 2012 I’ve been training in San Jose. Not far from San Jose is Fremont, a city with the largest Afghan community outside of Afghanistan.

“I have a lot of friends, close people from Afghanistan. In answering that question, I think I was misunderstood, I meant that I do not want to comment on the political situation.

“I hope they will forgive me if I offended them… I’m not ashamed to apologize to them, because anyone can make a mistake.

“When I said what I said, I just didn’t want to comment on politics.

“Their people are long-suffering. What was happening and is happening there, many have seen in their lifetime. It’s painful for them, I worry. I want to wish them all the best.”

Nurmagomedov was speaking in Moscow ahead of an event co-hosted by both Eagle FC (the fight league Khabib is involved with) and AMC Fight Night which is set to take place on September 17.

The show will be a tribute to Khabib’s father and trainer, Abdulmanap, who passed away last year after suffering complications related to a Covid-19 infection.