Home / WORLD / ‘I have nothing to hide’: Row grows after star from team raided by cops appears to mimic Lance Armstrong at Tour de France (VIDEO)

‘I have nothing to hide’: Row grows after star from team raided by cops appears to mimic Lance Armstrong at Tour de France (VIDEO) 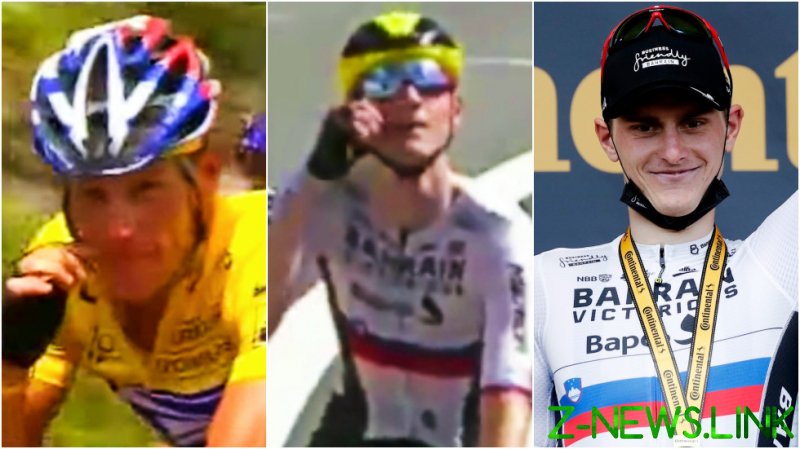 Matej Mohoric, of the embattled Bahrain Victorious team, seemed to replicate the gesture while storming to a stage victory at the famous race in the aftermath of police swooping on their hotel.

Fans argued over the wisdom of the Slovenian choosing to perform shushing and ‘zipping’ movements with his arms that were reminiscent of the gestures made at the race 17 years ago by Armstrong, who was stripped of his Tour de France titles and banned from the sport for life in 2012 after the International Cycling Union ratified US Anti-Doping Agency sanctions.

“Especially, I was thinking mostly about what happened two days ago in the evening, when I felt like a criminal with all the police coming to our hotel,” said Mohoric, referencing the raid by around 50 officers.

“From one point of view, it’s a good thing because there is still control in the peloton and they are checking all the teams. Of course, they didn’t find anything because we have nothing to hide.

“So from one point of view, it’s a good thing, but from another I’m a little bit disappointed with the system because it’s not a nice thing when the police walk into your room and start just [searching] all your belongings even if you have nothing to hide – it feels a little bit weird. It never happened to me before.

“When they go through personal photos of your family, through your phone, your messages, it feels a little like this.

“But at the end of the day, I have nothing to hide so I don’t care too much about other people checking through my stuff. It’s OK at the end – I hope.”

The Marseille prosecutor’s office is said to have launched an investigation into the possible “acquisition, transportation, possession and importing of a prohibited substance or method for use by an athlete without justification by members of Team Bahrain Victorious”.

With that in mind, not everyone was convinced by the need for a celebration that could have been construed as confrontational.

“If I was Matej Mohoric and my hotel got raided by the police and training files taken and an investigation launched into Bahrain Victorious, I probably wouldn’t do this kind of celebration,” said a journalist who claimed to have previously worked in anti-doping.

“But what do I know? The Lance Armstrong links to this style of celebration too and you want to do it in response to a hotel raid and investigation into doping allegations? I get defending your team but maybe do it after the case is closed.”

Another said: “Understandable – but with the history of this very gesture within cycling, extremely ill-advised. The press officer must be pulling their hair out as we speak.”

Others were more accommodating, with some pointing out that any evidence to support potential further action is yet to be found. “I f*cking loved it,” added one viewer. “I just love it how salty the French are because all of their riders and teams suck.”

Mohoric was the only rider from his team to join a 20-man move that culminated in his victory.

“I can’t believe it,” confessed the 26-year-old. “I was just trying to do my best. Our tactic today was to be attentive of the breakaways, especially if it was more than eight guys with Deceuninck-QuickStep or Alpecin-Fenix in them.

“When I saw those guys going, I just did a super big effort to get back to them. Then, unfortunately, there was another big group joining our small breakaway and we had no team-mates there, so I was a little bit disappointed.

“But I never give up and I just hoped for the best, tried to save some energy, and then in the final I tried to follow the attacks. When Nils [Politt] went on that final climb, I was so on my limit.

“I was almost exploding but I said, ‘if this is the hardest moment in the race then I need to do one more sprint. If I explode, that’s OK.’

“I really went for it and I looked back and nobody was there. I just went as hard as I possibly could and I completely finished my legs – towards the finish I was dying.

“I was doing ridiculous low power, but I was trying to be as aero as possible. Fortunately, I managed to keep my gap to the line.”