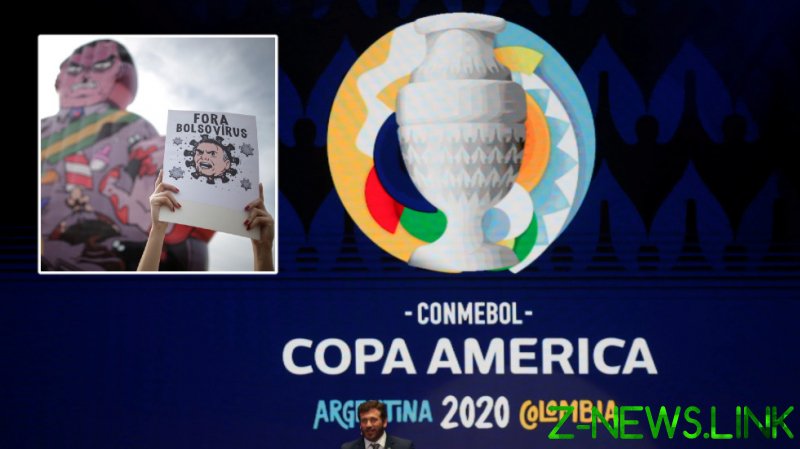 The decision was abruptly announced just 13 days before the tournament is due to start, with Colombia having a request rejected to postpone the tournament, which was set to be joint-held with Argentina, for a second time amid protests.

The authority had declared on Sunday that Argentina would not be able to host the the continent’s showpiece international spectacle, citing “present circumstances” that are believed to be a nod to mounting covid cases.

Brazil last hosted and won the tournament in 2019.

“The CONMEBOL Copa America 2021 will be played in Brazil,” a statement read.

“Tournament start and end dates are confirmed. The venues and the fixture will be informed by CONMEBOL in the next few hours. The oldest national team tournament in the world will thrill the entire continent.”

In the hours that followed, potential host cities such as Manaus and Recife are already said to have pulled out.

Put simply, nobody can quite believe that a Copa America moved from Colombia and Argentina due to social unrest and health issues has been switched to a country that is suffering from both of those problems simultaneously.

Second only to the US in total deaths, Brazil has lost 462,000 people to Covid, while huge numbers of people took to the streets to protest against president Jair Bolsonaro’s negligence during the pandemic across the country at the weekend.

Even his vice president, Hamilton Mourao, has conceded there should be reason for concern, saying earlier: “It’s not that it’s safer, but it is less risky [than Argentina]. Not more. Less. The risk is still there.”

“Until this morning, Brazil was not in the conversation,” pointed out Globo journalist Martin Fernandez.

“Both Conmebol and the [Brazilian FA] CBF ruled out the possibility because of the progress of the Brazilian league (which will not be interrupted) and the climate in the country.

“At the meeting, everything changed. Brazil saved the Conmebol tournament. At what cost?” he asked, highlighting that each team will be given $4 million for participating while $10 million is awarded to the winner.

In his blog, popular journalism personality Mauro Cezar, who has a million followers on Twitter alone, called the decision “inappropriate, risky, and dangerous”. Guilherme Boulos, who recently lost the Sao Paulo mayor election, dubbed it “a debauchery with our people”.

“It’s a shame, an insult, a slap in the face of Brazilians,” said SPORTV commentator Luiz Roberto.

“If it was a commitment made a year ago, OK. But taking on this responsibility 12 days before the event, in the midst of the health crisis, excuse me… I disagree,” said a sporting celebrity as high-profile as Cezar, Paulo Vinicius Coelho.

“If the [original] headquarters cannot [host it], it is not Brazil’s responsibility.”

With the venues still yet to be confirmed and seeming to drop out by the hour, at least one sound suggestion has been made among the mess.

With under two weeks to go until the scheduled start of the tournament, the timescale to make those huge decisions in is vanishingly small.