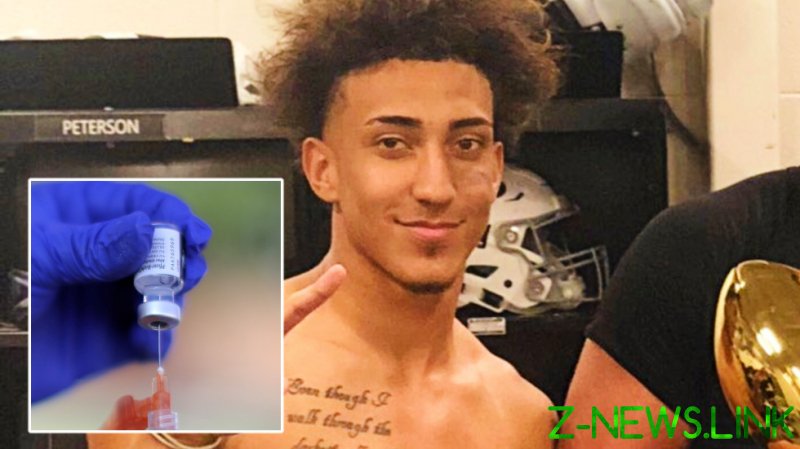 Rutgers University defensive back Peyton Powell made the announcement on Twitter, writing that he he felt that he had “no other choice” but to withdraw from the team and pursue opportunities elsewhere after voicing his opposition to the university’s position.

The New Jersey institution revealed in March that all students must be fully vaccinated before returning for the fall semester – but Powell says that he believes that a Covid-19 vaccination should not be “mandatory to attend school“.

“The University of Rutgers has made the COVID vaccine mandatory to attend school and play football,” Powell wrote.

“Therefore I have no other choice but to enter my name into the transfer portal.”

Powell, who is a native of Texas, has made several transfers during his collegiate career, joining Baylor as part of their 2019 recruitment class before asking for an exit prior to the start of the season.

He initially accepted Utah’s advances before changing his mind and opting to play for Rutgers – then once again had a change of heart, this time due to his apparent hesitancy to receive a vaccine against Covid-19, which to date has killed more than 631,000 people in the United States alone.

Rutgers coach Greg Schiano had indicated prior to the start of this summer’s training camp that more than 90 percent of his players had received vaccines against the virus.

Powell, meanwhile, was ranked as the 33rd best American Football prospect to come from his high school graduate class in the state of Texas, as well as being the 263rd best prospect in the United States. He now finds his college career at a crossroads as he looks for a new program to host him.

Several NFL players have already indicated that they are wary of receiving a vaccine shot, with the likes of Cole Beasley of the Buffalo Bills particularly vocal about the issue.

New England Patriots quarterback Cam Newton is another thought to be unvaccinated and was this week forced to quarantine from his teammates after a Covid-19 close contact situation – with heavy speculation in the media that rookie QB Mac Jones could be installed as the team’s new permanent starter in Newton’s place.