Home / WORLD / ‘I had one arm’: ‘Blonde Bomber’ boxer wins latest fight on razor-thin decision despite breaking her hand in second round (VIDEO)

‘I had one arm’: ‘Blonde Bomber’ boxer wins latest fight on razor-thin decision despite breaking her hand in second round (VIDEO) 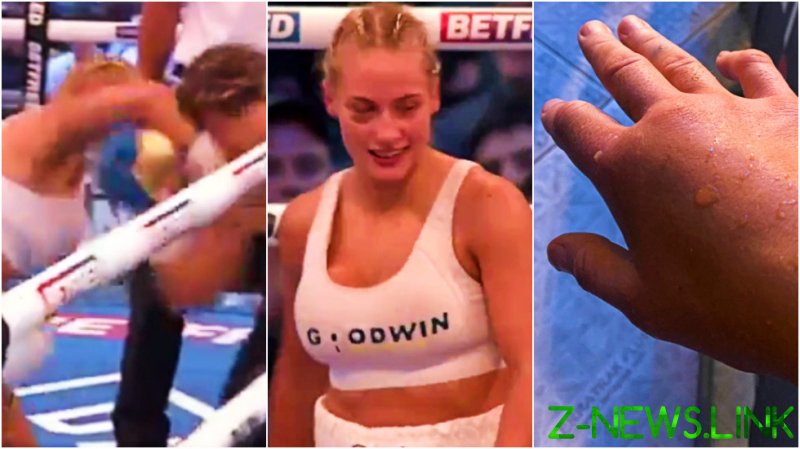 The ‘Bronze Bomber’, who is known for stripping to her lingerie at weigh-ins, slugged it out with tough French opponent Mailys Gangloff at a stadium in Leeds as she edged a 77-76 points card to make it seven wins out of eight in her professional career.

Australian Bridges had support among the crowd, not least because she is an outspoken fan of the city’s Premier League side, wearing a tracksuit based on the club’s colors as she made her way into the venue.

“It was pretty sore for a few rounds, went numb and then I think I broke it even more in the seventh,” brave Bridges said of the gruesome injury she sustained in the second round.

“I like a fight and I always say that I like to entertain. She came out boxing, which I didn’t expect – I expected her to sit in the middle with me a little bit more. It was a fun fight.”

Many fans on social media felt the decision was highly contentious. “I thought I actually won pretty clearly, to be honest,” insisted the 34-year-old.

“I thought I was controlling the fight and my punches were landing a lot heavier. Her workrate was a little bit more but I don’t think she was landing as flush.

“I had one arm. It was a bit hard for me to throw my right hand and I had to adjust but it’s all good, it’s all learning.”

English fighter Ellie Scotney threatened to give Bridges a “dusting” afterwards, and a bout between the two could make sense given that the former amateur champion is signed to Matchroom Boxing, whose card Bridges fought on.

“She’s a great boxer,” Bridges retorted when she was asked about Scotney’s threat.

“That’s a fight I’m happy to make. It would be amazing to share the ring with Ellie.

“I don’t think she has the power but she’s very, very skilled. That would be a great fight and a fight that the fans would like to see as well.”

The former mechanic and bodybuilder, who is also a maths teacher, said she is hoping for the best when her hand is scanned, while viewers continued to debate the result of the fight.

“How on earth did Ebanie Bridges blag that decision?” asked one skeptic. “Got smashed for eight rounds. Feel for Gangloff.”

Another argued: “I had it a draw, so a point either way is no issue. Some of the hate for Bridges on [social media] is toxic.”

A Bridges admirer accused her doubters of “loving to hate” her. “Chick is a warrior every time she steps in the ring, which seems like every month,” they added. “You all will come around eventually.”

Bridges’ hand horror is not the first grim-looking result of her clobbering exploits in the ring.

After suffering the only defeat of her career to Shannon Courtenay in an action-packed punch-up in April, the Australian super-bantamweight title holder revealed an eye injury so pronounced that she claimed it stopped identification software from recognizing her.