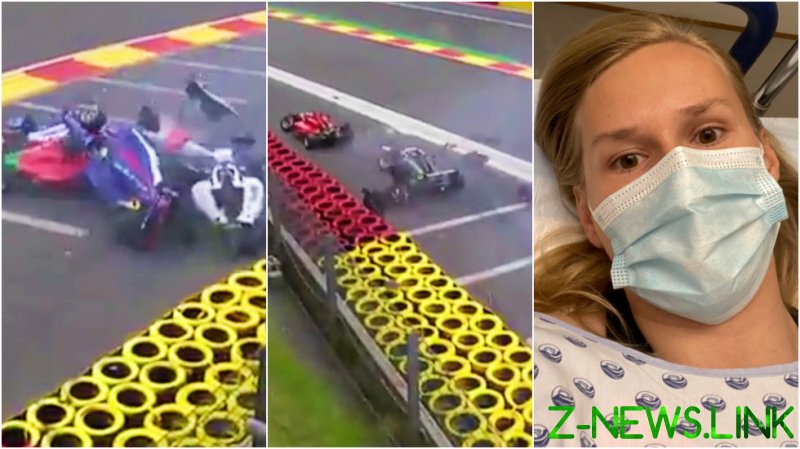 W Series drivers Ayla Agren and Beitske Visser were hospitalized after two cars initially hit a barrier at the Belgian Grand Prix, held at Spa-Francorchamps, before another ploughed into them and three others followed at terrifying speed.

The Eau Rouge corner where the worrying collision happened is known as one of the most difficult in the sport, appearing slightlier earlier in the track than the swerves where 22-year-old Formula 2 driver Anthoine Hubert died after an accident in 2019.

Two of the other drivers involved, Sarah Moore and Abbie Eaton, initially lost control and spun into the barrier, swiftly joined in the pile-up by Visser, Agren and Marta Garcia.

Fabienne Wohlwend drove wide and hit Visser’s car, leaving the Liechtensteiner upside down, while Visser’s car flew into the air and bounced off the top of the tyre barrier, hurtling back onto the track.

Visser needed a brain scan and had her leg X-rayed but was later released with Agren. Their four rivals involved in the crash were assessed by doctors but said to be unharmed.

Thanking concerned fans who sent her support, Visser admitted: “That was a very scary one.

“I think I had an angel on my shoulder. I’m very sore but luckily I have no fractures.”

Agren also expressed gratitude to fans who sent her “support and messages.”

“I am all OK,” she reported. “Bruised and sore but no broken bones.

“Also want to thank everyone at W Series and Spa-Francorchamps for the medical help.

“Today is a new day and I am looking forward to getting back behind the wheel of [her Forbes Motorsport] car sometime soon.”

Wohlwend pledged to continue racing this weekend despite “feeling a bit sore”.

“I am very grateful that everyone is OK after the horrible crash in yesterday’s qualifying,” she said.

“I was trying to avoid the spinning purple car infront of me and couldn’t see the cars on top of Eau Rouge.

“My amazing W Series crew worked very hard to get my car ready for [Saturday’s] race, so I’m going to jump in and give it my all. Please keep your fingers crossed.”