Home / WORLD / ‘I don’t want to talk about it’: Khabib Nurmagomedov in fiery exchange with reporter amid Taliban takeover of Afghanistan (VIDEO)

‘I don’t want to talk about it’: Khabib Nurmagomedov in fiery exchange with reporter amid Taliban takeover of Afghanistan (VIDEO) 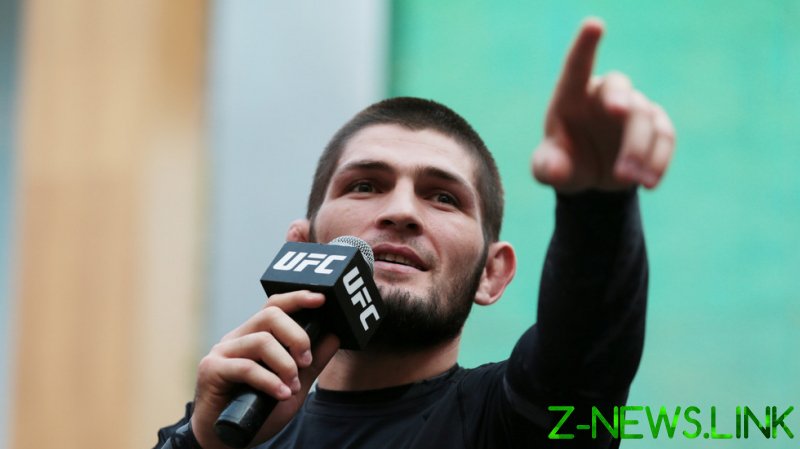 Retired former UFC champion Nurmagomedov, who is one of the most prominent Muslim athletes in the world, refused to be drawn into a debate about the rapid fall of Afghanistan and its capital Kabul to Taliban forces in recent days after the group – who are designated as a terrorist organization by many nations – moved to fill the vacuum left behind by the hasty withdrawal of U.S armed forces.

At the press conference, which was to promote Nurmagomedov signing a five-year deal to promote Gorilla Energy, Khabib was asked for his opinion on the Taliban takeover which dominated the world’s press in the past week and has prompted thousands of Afghan nationals to attempt to flee the country.

The reporter referenced Khabib’s criticism of French president Emmanuel Macron last October in which Nurmagomedov was critical of Macron’s response to a series of stabbings in Nice and a suburb of Paris, writing online that Macron had “offend[ed] the feelings of more than 1.5 billion Muslim believers“.

He also posted an image to Instagram of a boot superimposed over Macron’s face.

But if Khabib was outspoken on that occasion, not so this time around.

“You were talking about the situation in France last October. It was hard,” began the question before Khabib cut him off.

“That was last October. It’s August now, I don’t wanna talk about it”, Khabib said.

“My question is not about that, I want to ask about the situation in Afghanistan nowadays,” said the reporter. “Are you shocked by it?”

Khabib asked the reporter if he had any links to Afghanistan to which he denied, and Khabib said that neither did he.

“I wouldn’t like to sit here during such a serious and unique deal for a Russian sport,” said Nurmagomedov.

“We have never have such a serious deal neither in Russian football, not in hockey. Today we have such a deal, and I wouldn’t like to discuss this political moment that happens thousands of kilometres away.”