Home / WORLD / ‘I don’t know how to tackle’: Pogba produces yet another penalty calamity as Manchester United hand out thrashing in Europa League

‘I don’t know how to tackle’: Pogba produces yet another penalty calamity as Manchester United hand out thrashing in Europa League 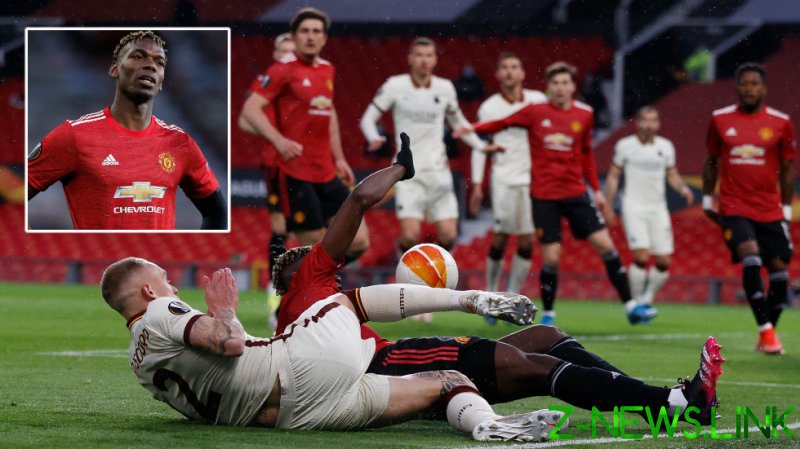 Having been part of a slick opening goal for United with less than ten minutes gone in the Europa League semi-final second leg, Pogba unwittingly handed the Serie A side the chance to equalize little more than five minutes later, slipping on the wet Old Trafford turf before a cross hit his hand inside the penalty area as he tried to track back.

That allowed Roma captain Lorenzo Pellegrini to score from the spot, and Pogba’s pain was temporarily heightened when former Manchester City marksman Edin Dzeko then gave the visitors a lead that they held on to at half-time.

With Roma losing three players to injury in a freak first-half that left their technical area looking more like a treatment room, Paul Scholes and Owen Hargreaves – both Champions League winners with United during their playing careers – suggested on TV at the interval that manager Ole Gunnar Solskjaer should make changes.

By the time he did, United had already scored four times without reply in a sensational second-half display that makes them almost certain to reach the final and exorcise the demons of their semi-final exit last season.

Pogba planted in a powerful header from a superb Bruno Fernandes cross to make it 5-2 a minute before Solskjaer’s first substitution, when he introduced 19-year-old Mason Greenwood, whose late goal made him the third-highest teenage goalscorer for United of all time behind legends Norman Whiteside and George Best.

World Cup winner Pogba ended the evening with a smile and some less impressive defensive stats: four of the last six penalties against United at home have been down to him, as well as three of their last four conceded at any venue.

“I don’t know how to tackle,” the France star wryly replied when he was asked about the peculiar difficulties of trying to avoid a ball hit at speed touching his arm in tricky conditions, nodding to critics who question his defensive attributes.

Barring an almost unimaginable disaster in Rome next week, Solskjaer will have his best chance of winning his first trophy as United boss by reaching the final of the competition.

“It’s easy, up there, thinking about who should play – but who should not play?” said the coach, eyeing the TV studio where Scholes and Hargreaves had been offering advice when United were behind.

“It’s a good team that played [in the 3-1 win] against Tottenham. Maybe those two should try to leave players out themselves and pick a team with balance.

“Paul is very good in the position he played today because he’s got freedom but he’s got a solid foundation behind him.

“The two [conceded] goals were very schoolboy errors that shouldn’t happen at this level. We said that at half-time and corrected it.”

Pogba felt the first half was a combination of opportunism and lapses. “We made two mistakes and they scored two goals,” he said. “We talked at half-time and said, ‘let’s do the right things, let’s do the simple things.'”

United could feasibly still be part of an all-English final after Arsenal lost 2-1 at Spanish side Villarreal in the first leg of the other semi-final. The Gunners will reach the showpiece if they win 1-0, prevail by two clear goals or register a 2-1 victory and then have the better of a penalty shootout when they play their home leg next week.