Home / WORLD / ‘I don’t have $50’: UFC’s Norma Dumont says she is ‘fighting to survive’ ahead of Las Vegas headliner amid promotion pay row

‘I don’t have $50’: UFC’s Norma Dumont says she is ‘fighting to survive’ ahead of Las Vegas headliner amid promotion pay row 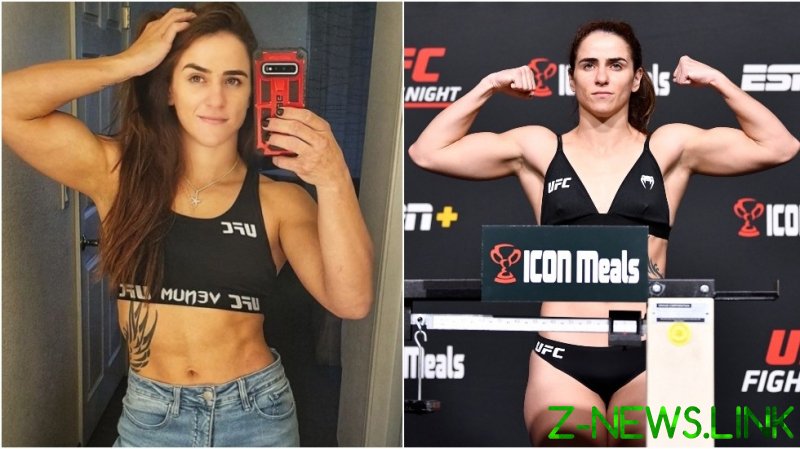 Dumont will top the bill of a UFC event for the first time at the Apex on Saturday night as the Brazilian takes on American rival Ladd, who stepped in when former bantamweight champion Holly Holm was forced out due to a knee injury.

Ladd was seen failing desperately to make weight for a scheduled bantamweight fight against Macy Chiasson earlier this month but was handed a chance of redemption at 145lbs against Dumont.

For both women it offers a chance for momentum towards a potential title shot in a division ruled over with an iron fist by Amanda Nunes.

But despite preparing for the spotlight of a main event, Dumont, 31, says things have been far from easy for her financially.

“I’m fighting to survive, to live, to pay the rent, my bills. That’s what some people don’t understand. I’ve never had a good financial situation. I’ve always been hustling. People who are close to me know it,” said the US-based Dumont to Combate (via SB Nation).

“People think that because I’m in the UFC, in Vegas, I must be swimming in money. Ever since we’ve moved here, we’ve been doing food deliveries, now Johnny (Vieira, Dumont’s coach and husband) is working at the gym, but he doesn’t earn a lot, it’s enough to pay the rent. I have some support to cover food and supplements, but that’s the minimum.”

Fighter pay has become an increasingly contentious issue in the UFC, with accusations of fighters being undervalued by promotion chief Dana White.

High-profile cases have seen the likes of Jon Jones demand a better deal, while outsiders such as YouTube boxing upstart Jake Paul have gladly stirred the pot.

Dumont is entering the UFC Octagon for the fourth time this weekend and boasts a 2-1 record in her outings thus far, defeating Felicia Spencer via split decision in her last appearance in May, but admitted that times were hard for her.

“My manager helps me a lot, otherwise I would have returned to Brazil already. This is not a problem for me though, it’s fuel. I have to do my job.

“When I lived in Brazil, I didn’t think that UFC fighters were paid badly. I thought it was good because I would convert it (to reais). But it’s hard for those who live in the US, because our expenses are also in dollars.”

Dumont’s suggestion to ease the financial burden for fighters was for them to be paid a monthly salary,, rather than waiting for fight nights and the hopes of added bonuses.

“It’s not a monthly thing, too. We get paid every four months or so, if you’re an active fighter. If you get injured, you’re f*cked. You don’t know when you’re coming back to the cage,” she said.

“I think it would be nice if the UFC would pay a minimum monthly wage of $3,000 or $5,000. Then when a person fights, they would make what they already make today. Then you can survive for a few months and when you get the fight money, you can actually earn some money.

“Maybe it can get better when I renew my contract. The amount is really low in your first UFC contract. If you’re in Brazil saying we have no reason to complain, come to the US and see you would not last three months here with your first UFC check. It’s the reality.”

Both fighters made weight on Friday for this weekend’s UFC Vegas 40 showdown, with the 26-year-old Ladd tipping the scales at 145lbs and Dumont coming in at 145.5lbs.

Ladd boasts a 9-1 record in her professional MMA contests to date, while Dumont takes a 6-1 record with her into the cage on Saturday night.