Home / WORLD / ‘I don’t call on activists’: Sparks fly at first White House press conference in over a month

‘I don’t call on activists’: Sparks fly at first White House press conference in over a month 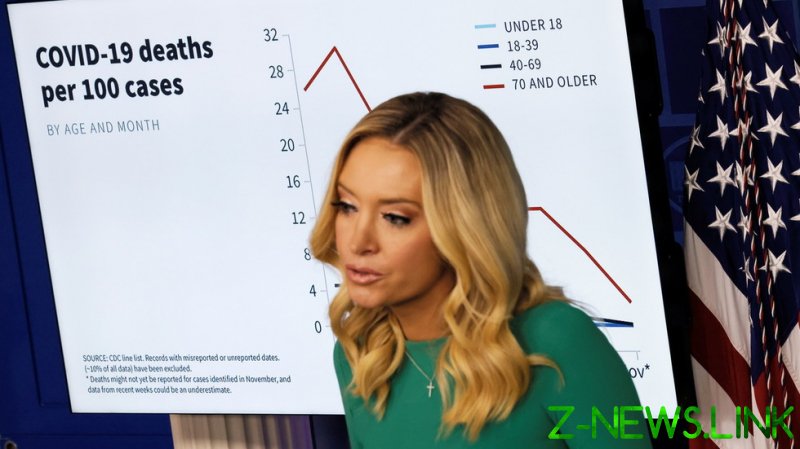 Friday’s briefing was the first since October 1, two days before President Donald Trump tested positive for the virus. McEnany herself had a positive test on October 5, and wasn’t cleared for live appearances until October 16. Then came the hotly contested election that mainstream media called for Democrat Joe Biden, though Trump has refused to concede, claiming irregularities.

While the press conference lasted about as long as Thursday’s event with Biden and his running mate Kamala Harris in Delaware, the tone was completely different. McEnany tried to keep to the topic of Covid-19, but nine out of thirteen questions she acknowledged on Friday – not counting Brian Karem’s heckling – were from reporters demanding to know why Trump hasn’t conceded yet and arguing he really, really should.

Weijia Jiang of CBS did ask about the virus, framing the 250,000 deaths as a White House failure and accusing the administration of “mixed messaging” on masks and mitigation that, by implication, cost lives. McEnany’s response was to remind reporters of the estimates that two million people would die, and defend her characterization of Democrat governors threatening people with jail time for Thanksgiving gatherings as “Orwellian.”

She deferred the questions about the electoral lawsuits and campaign strategy to the campaign, pointing out that the White House is focused on battling the virus and “winding down wars in Afghanistan and Iraq,” and bringing up a forthcoming announcement about drug pricing.

As Karem continued to shout from the back, McEnany declined to call on CNN’s Kaitlan Collins, saying “I don’t call on activists.”

She did take one last question, from OAN’s Chanel Rion, to deliver a mini-lecture to reporters as has been her habit. Noting that the FBI and the Department of Justice have been entirely silent on the election, McEnany reminded the press corps that Trump was never given a proper transition or recognition of legitimacy, but was instead spied on, investigated for ‘Russiagate’ and even impeached.