Home / WORLD / ‘I didn’t ask him for it’: Germany star Gosens ghosts Ronaldo after getting revenge for shirt request snub 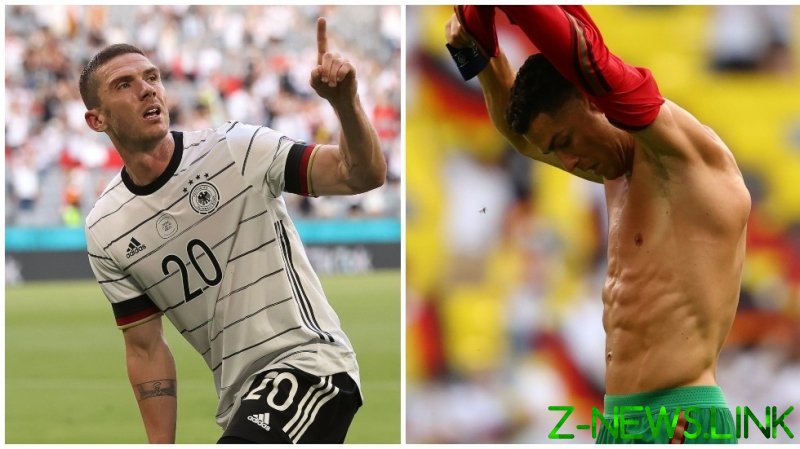 Gosens was inspired as the left wing-back tormented Portugal, providing two assists before getting on the scoresheet himself in Germany’s 4-2 romp to put them back on track in Group F.

READ MORE: Portugal routed in Munich as Germany get Euro 2020 campaign back on track

Atalanta ace Gosens was replaced in the 62nd minute but his shift was enough to pick up UEFA’s (annoyingly-named) ‘Star of the Match’ accolade.

Victory over Portugal was perhaps all the more sweet for Gosens, who previously revealed in his autobiography that CR7 had snubbed him for a shirt request following a Coppa Italia victory for Atalanta over Juventus back in 2019.

“After the final whistle I went to him, having not even gone public to celebrate… but Ronaldo did not accept,” he said.

“I was completely blushed and ashamed. I went away and felt small.”

Gosens was likely feeling 10ft tall after helping Germany to an emphatic win on Saturday, but nonetheless revealed after the game that he had not taken the chance to approach Ronaldo and try to rectify the shirt snub from two years ago.

“In the end I didn’t ask Ronaldo for the shirt, I want to enjoy the win and tonight,” Gosens told Sky Sport Italia. “I didn’t look for him.”

Things had started well enough on Saturday for Ronaldo and defending champions Portugal after the forward gave them the lead in the 15th minute.

Charging 90 yards up the pitch for a counter-attack, Ronaldo brilliantly found space to tap home a cross from Diogo Jota.

But after that it was all Germany as own goals from Ruben Dias and Raphael Guerreiro were followed by finishes from Kai Havertz and Gosens as the hosts took a 4-1 lead.

Jota pulled one back for Portugal in the 67th minute following a Ronaldo assist but the damage had already been done.

It was a sweet win for Gosens, who was winning only his ninth cap for Die Mannschaft and scored his second goal.

“It’s an unforgettable evening for me,” said the 26-year-old.

“We won against a very strong team and personally I scored my first goal and got my first assist in such an important tournament. I’m proud and happy.”

Germany’s win saw them bounce back from a 1-0 opening game defeat to France. Portugal meanwhile suffered a first defeat after beating Hungary 3-0 in their opening game.

France’s 1-1 draw in Budapest earlier on Saturday means things at tight between the three titans in Euro 2020’s designated ‘Group of Death’ heading into the final round of games on Wednesday.

Despite the disappointment – and Gosens’ lack of interest in getting his hands on his shirt – Ronaldo still found the time to make one fan’s day by tossing his jersey to him in the crowd at the Allianz Arena.